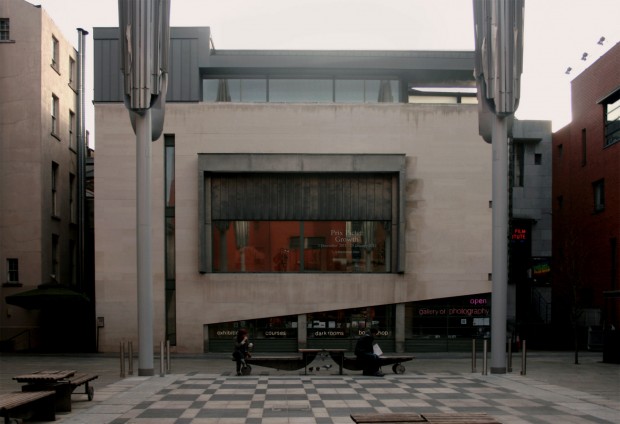 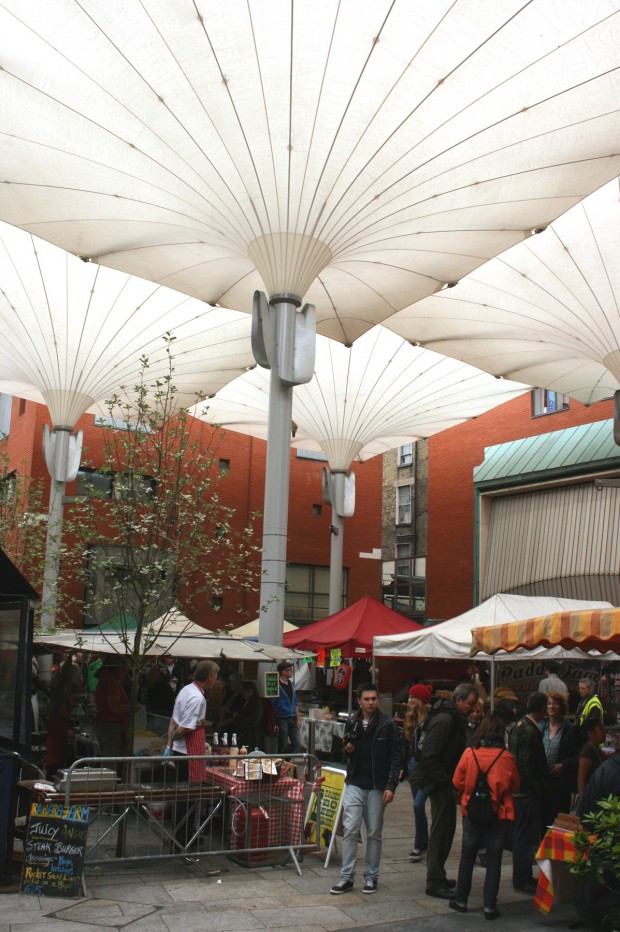 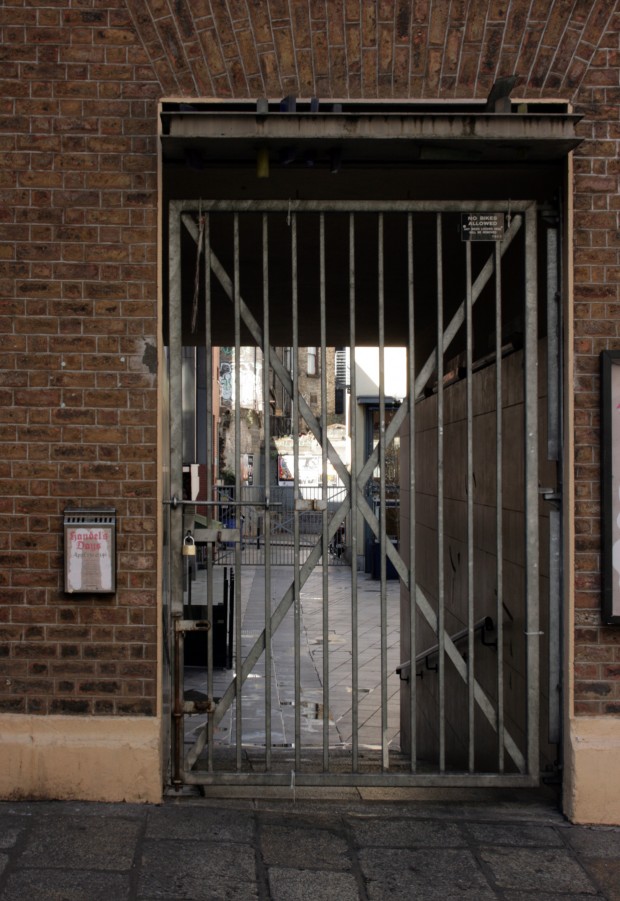 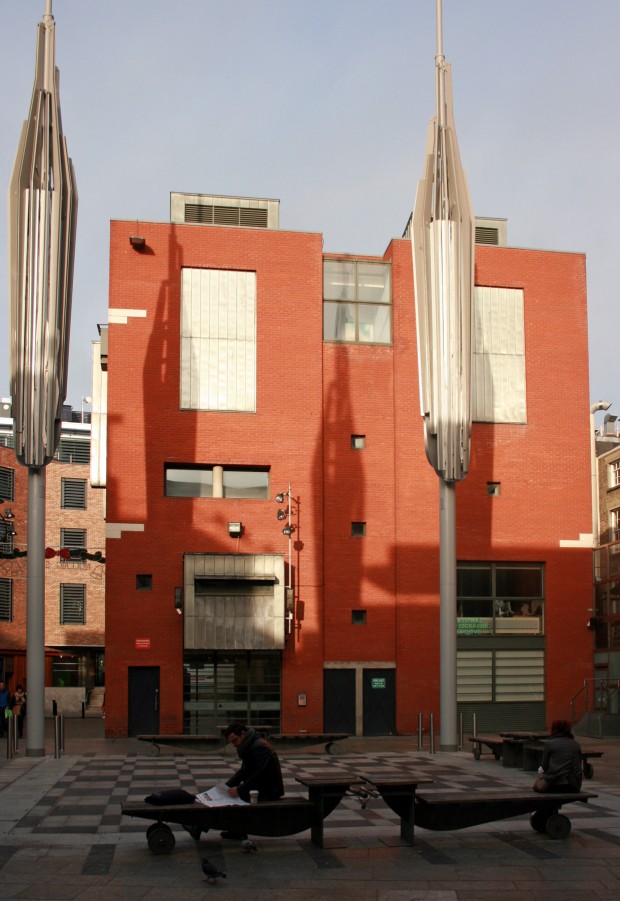 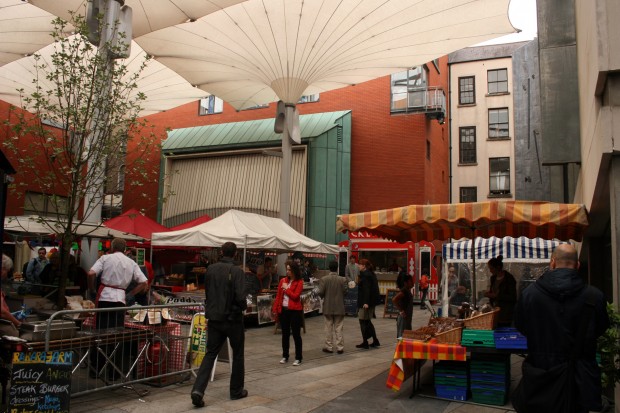 One of three public spaces created by Group 91‘s masterplan for Temple Bar (along with Curved Street and Temple Bar Square), Meeting House Square is probably the most difficult to evaluate.

The square, completed in 1996 and designed by Paul Keogh Architects (attributed to ‘Group 91/Paul Keogh Architects’), occupies a site that was formerly in use as a surface car park. The name comes from two of its neighbours – the former Quaker Meeting House (now the Irish Film Institute) and the Presbyterian Meeting House (now housing The Ark, a cultural centre for children). Its original (1996) paving was Wicklow granite and the square was intended as an open-air performance space, an outdoor room to complement the cultural activities of the quarter. The four walls of the room are made by Group 91 buildings – the Ark (1995, Group 91/Shane O’Toole and Michael Kelly), the Gallery of Photography (1995, Group 91/O’Donnell + Tuomey, on the sliver between the square and O’Donnell + Tuomey’s pre-Group 91 Irish Film Centre, now the IFI), the Sycamore Building/Gaiety School of Acting (1995, Group 91/Paul Keogh Architects), and the National Photography Centre (1995, Group 91/O’Donnell + Tuomey).

Meeting House Square was never heavily used. It’s a beautiful space, especially with the beautiful multi-level benches (removed for years) which look like market barrows or grown-up wooden trucks, but it’s big and it didn’t draw in enough people to mitigate that. The original intention for the square included a new bridge across the Liffey on axis with the Essex Street entrance to the square, cutting through the block in between, but the difference of a few metres between this and the Millennium Bridge is that all pedestrian traffic flows up Eustace Street instead. It was also intended that the building on the corner near the Gallery of Photography, now housing a fast food restaurant, would be demolished and that there would have been a stronger axial approach from Parliament Street, but this wasn’t to be either. It’s a huge pity about the bridge, in retrospect, as the route would have made Meeting House Square a true second centre to Temple Bar in the way that Temple Bar Square is.

Here’s where it gets complicated. Meeting House Square has been brought to life over the years by the food markets and cultural events taking place there, run by Temple Bar Cultural Trust, and in 2011 the square was closed for new paving and a set of four huge umbrellas (designed by Sean Harrington Architects) to be installed, allowing the square to be roofed in inclement weather and used all year round. These 21 metre high umbrellas are clever and quite elegant, asymmetrical and structured like alien flowers. (I find the chequerboard paving ugly and regrettable, though.) I haven’t observed much change in the numbers of people using the square out of programmed hours, but I’m only observing it when passing by.

The difficulty is that Meeting House Square isn’t really a public space – the matter of what is is a nice messy debate that’s been raging for a long time, but a city square open to the public doesn’t get locked up with big gates like this one does. It’s been turned into a venue for cultural tourism and feels like a private space any time it’s in use. Arguably, the original open-air venue failed and perhaps it’s better to appropriate it for reuse than leave it empty, but the changes have pushed it far from the open, European civic space intended and that seems a great pity.

And when those gates are closed, it’s just a middle finger to Dublin.