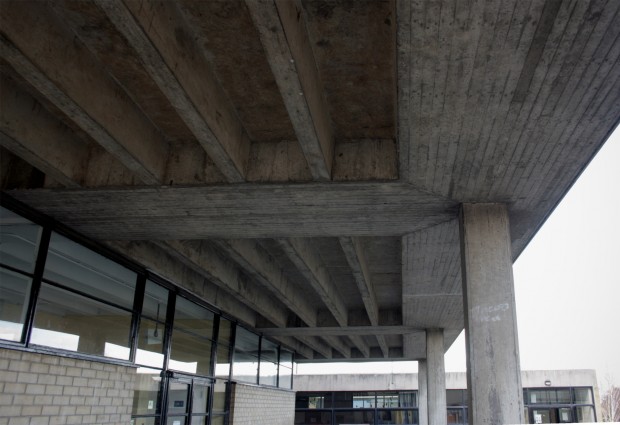 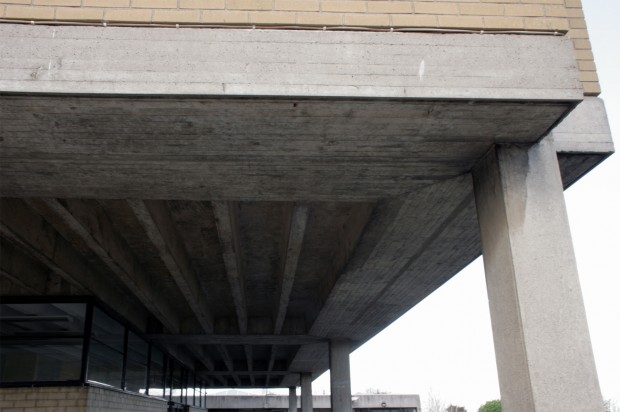 These details of board-marking on the main classroom block at Wesley College (Robin Walker of Scott Tallon Walker, 1965-9) caught my eye when I visited the school. I’ll be featuring the whole Wesley campus later this week.

Concrete is a plastic material, so it takes on the shape and surface texture of its formwork (the mould in which it’s cast, usually made from timber), whether it’s poured on site or precast in a factory. This allows for a lot of architectural interest. In some buildings, there’s an obsession with having a flawless finish without a bubble in sight, while in others, the marks left by the bolts bracing the formwork are placed precisely and displayed as a surface feature. St Fintan’s Church in Sutton, previously featured, has a ribbed concrete texture apparently made using rope.

Here, the interest is in the geometry of the boards laid inside the formwork, resulting in this neat 90° junction between the two beams on the soffit (underside) of the colonnade. The concrete bands and structural elements have all weathered to emphasise the edges and boardmarks, showing the care taken in the original detailing and construction. Concrete is often misrepresented as being dull or drab, but here it’s as visceral, textured and satisfying as aging timber.

Many thanks to Fergus Madden and principal Christopher Woods for permission to visit Wesley College.