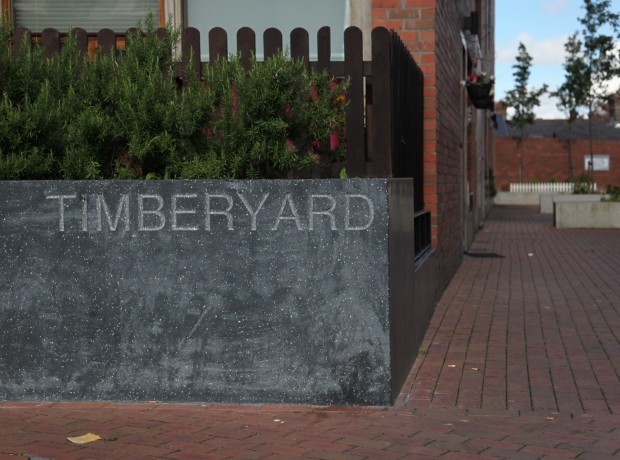 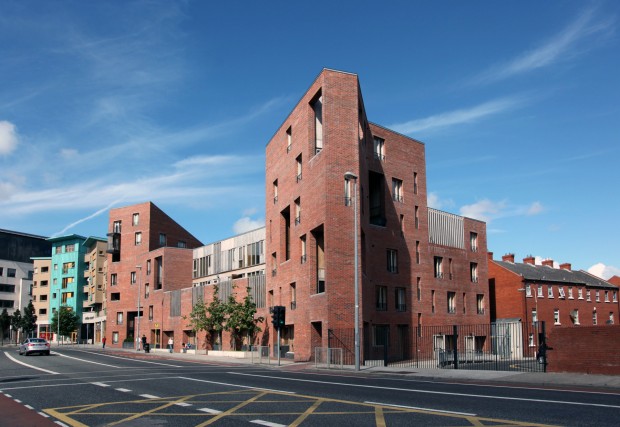 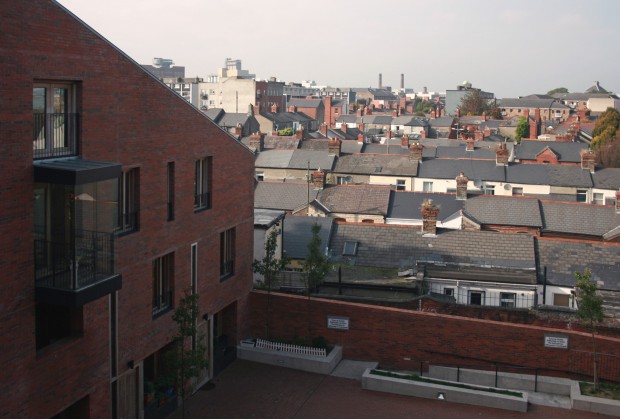 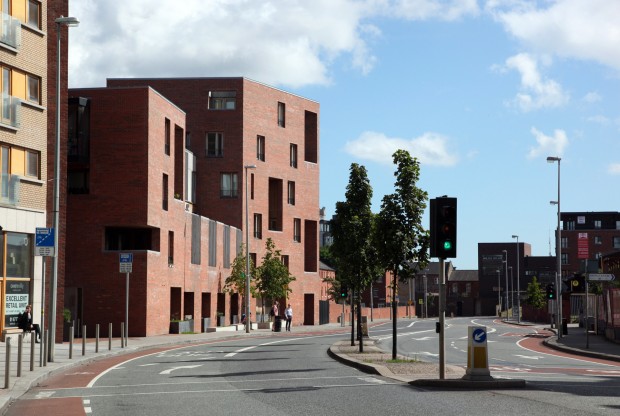 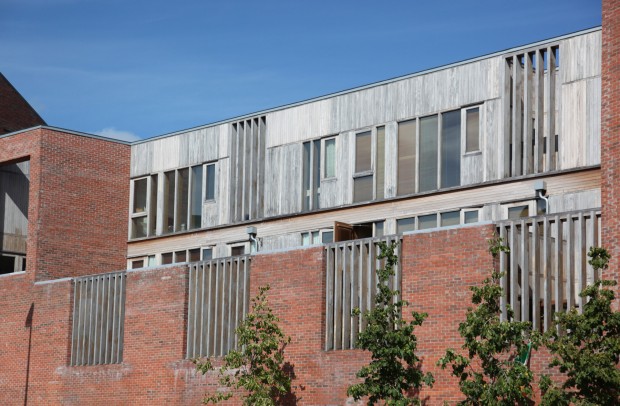 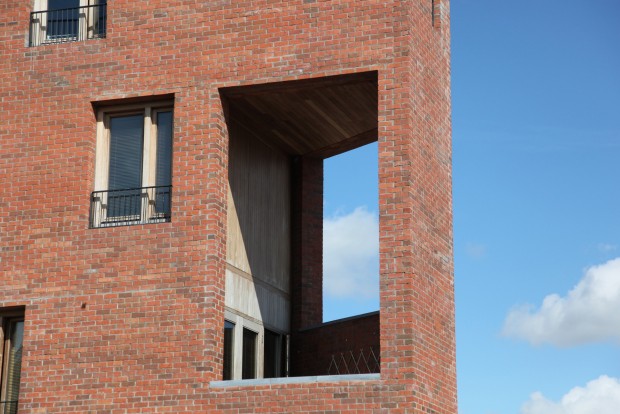 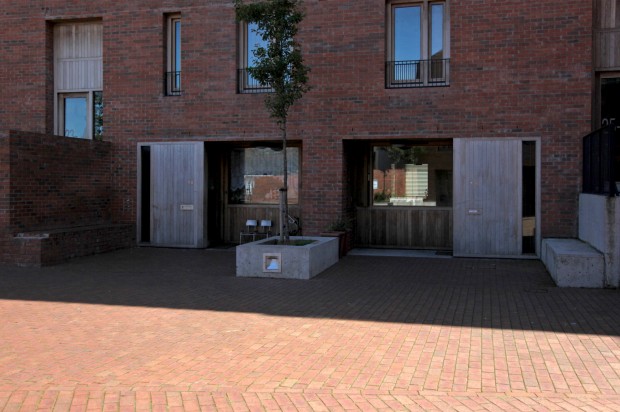 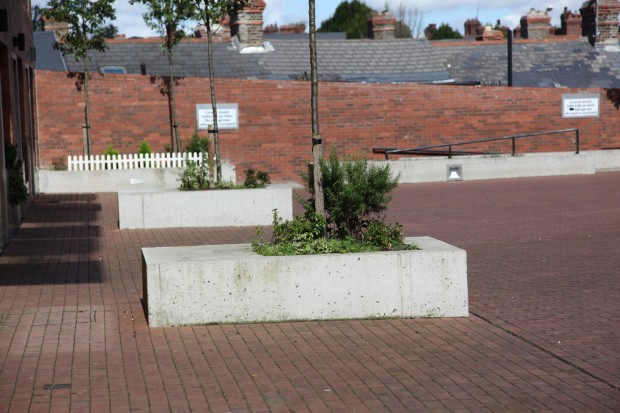 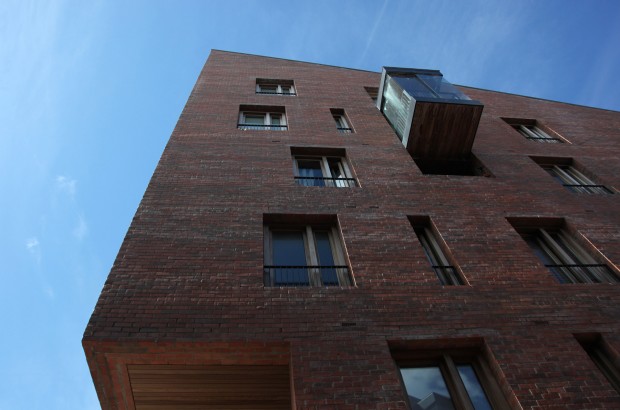 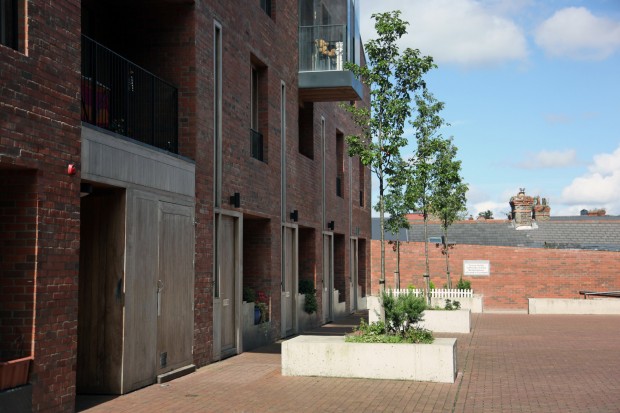 Named for the site’s previous use, O’Donnell + Tuomey’s Timberyard provides 47 social housing units and a community room. The Coombe bypass and realignment of Cork Street (a subject of debate for decades, carried out and completed in the early 2000s) involved demolition of social housing and new sites being exposed while others were lost, and the architects describe a need for “healing the wounds caused by the road engineering operation” as part of their brief. 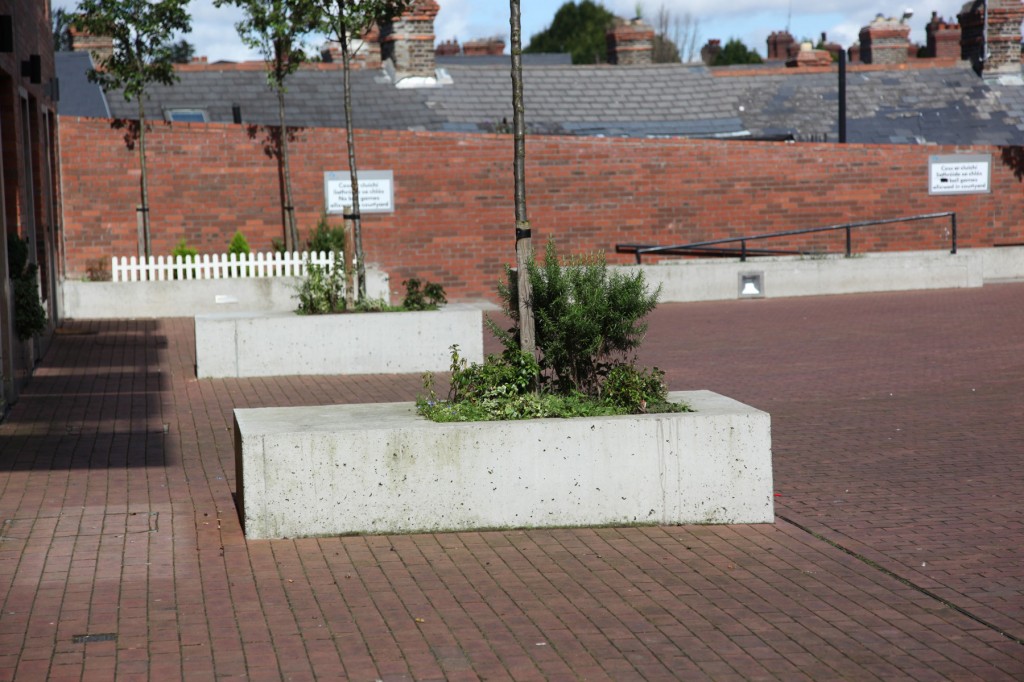 It’s a magnificent project, one I’ve passed hundreds of times and still feel excited to see. For me, there are three successful aspects: the materials and construction, the approach to making homes, and the relationship to context. 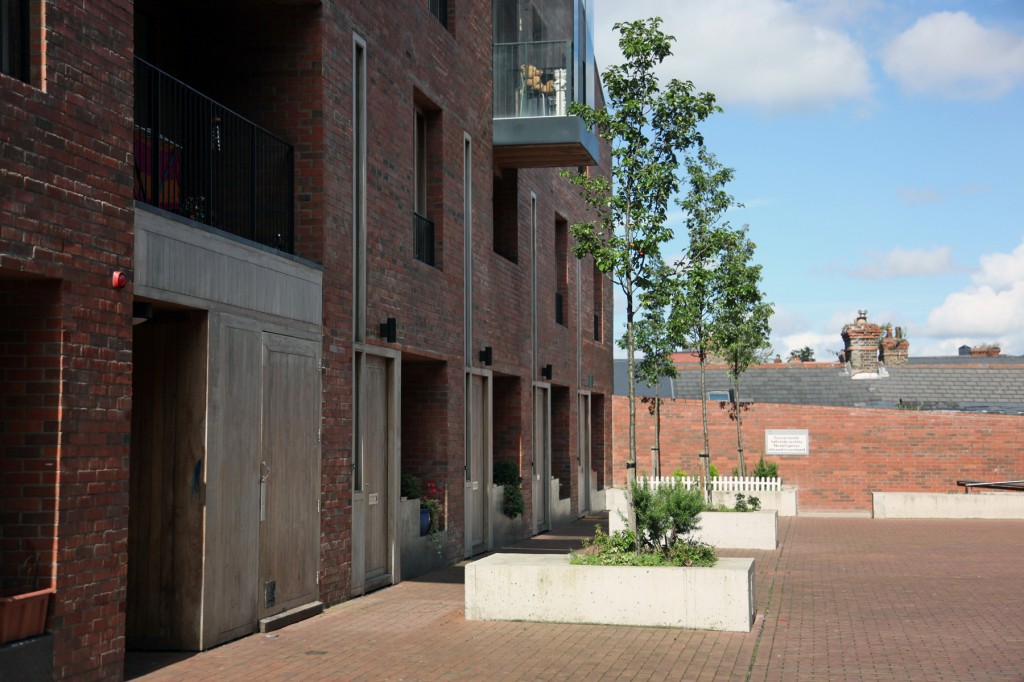 Materially, it’s looking very well a few years in. The structure is concrete (in situ), with the exterior wrapped in brick which continues down into paving, while untreated iroko is used for the timber windows and screens. The iroko weathering towards greyer tones is set off well by the crisp lines of the brick, and the strips of timber are particularly attractive where they’re framed as a series of panels or combined with perpendicular timber, like on the recessed portion of third and fourth storeys on Cork Street. 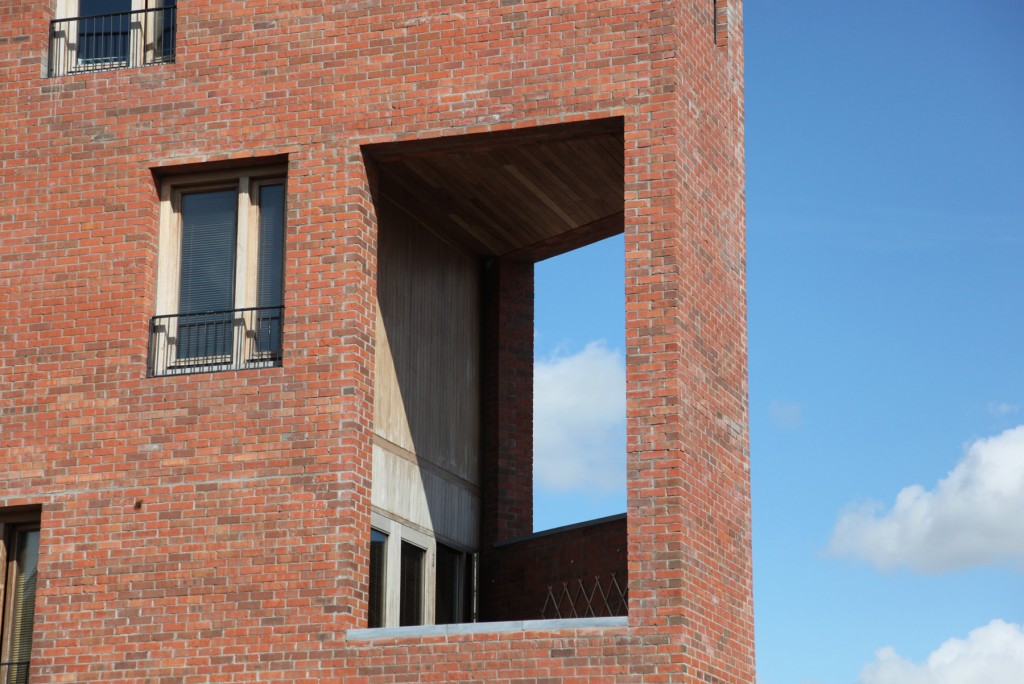 Brick is widely used in the area, in residential terraces as well as industrial buildings, and the timber provides a nod to the site’s history. One of the bigger contextual moves is the modulation between levels, not mimicking the neighbours (which run from single-storey to taller buildings) but breaking the mass up so that even pairings with lower streets don’t leave the residents facing into a sheer wall. It also provides a variety in levels to the building, and I think some of the affability of the project comes from the variations: height changes providing terraces, staggered openings accommodating recessed windows and balconies and projecting bay windows. At the same time, the approach from the St. Patrick’s Cathedral side shows a monumental building, the high corner angled coyly to reveal the building’s two faces at once. The approach from Dophin’s Barn is less overt and the first high bookend is almost absorbed by the street, with the lower recessed section to the centre giving a gentler impression of domesticity and complexity. 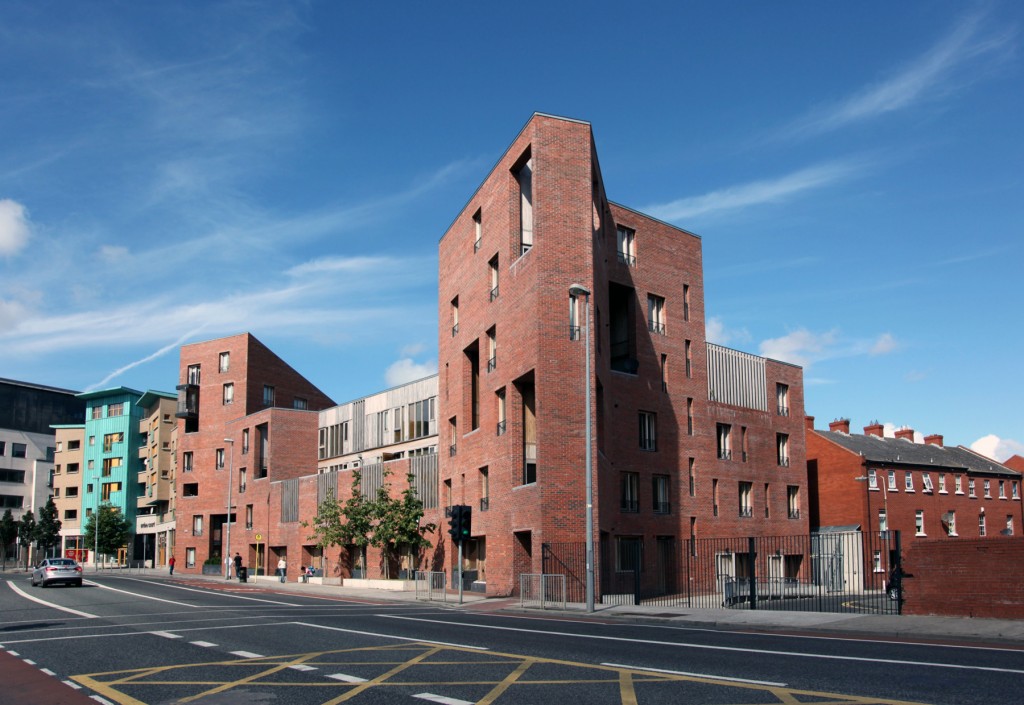 The site is wedge-shaped and the interior of the building’s mass contains a triangular open space. On one side, ground floor units with porches and benches are mirrored in pairs like an act of gentle matchmaking – you don’t have to get to know your neighbours, but there’s a nice spot for summer evenings outside if you do. In between, stairs provide access to circulation cores for the upper levels. The facing block has a low bench and integrated flowerbed by the door, much like those on the Cork Street ground floor. So, there’s a repeating pattern for a few units, like living in a terrace of houses, but never the uniformity of “mine’s the one with the red window.” This isn’t the place for a pat summary of 20th century mass housing, except to say that the careful balance of conviviality and privacy, home and street, series and individual, seems like a good approach: making attractive, enviable homes becomes all the more important when the residents may not have chosen their homes. 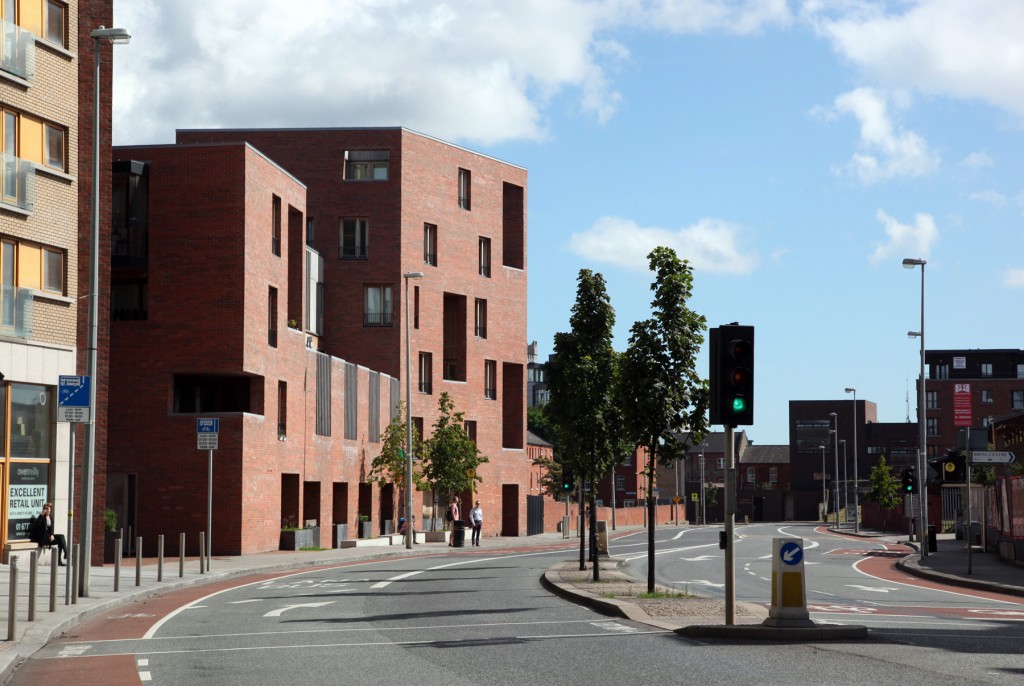 My favourite aspect of the project is the relationship to the public. Along Cork Street, the benches are used by people waiting for the bus, with no sense of intrusion. The open space is genuinely open and you can walk in, mindful of it being domestic like a cul-de-sac, and a community room on the corner provides for the possibility of an explicit interface between residents and the city. It’s in stark contrast to two other urban moves on Cork Street, both of which enrage me every time I see them. One, the decorative gate on Ardee Court, is an ornamented act of contempt shutting off the street from the apartments, creating a dynamic of enclave and threat – it’s not the only gated development on the street, but the decorative aspect feels like a taunting provocation. The second feels merely oblivious, by contrast: the benches outside the block on the corner with Ardee Street, on a footpath too wide for the area’s footfall. With the ground floor retail units shut in the evenings and some of the benches screened from the street by the unfortunate placement of caged trees right there, the benches feel like they should have a big target sign painted on them. Timberyard is about 50m away, in the same inner city context and facing onto the same four-lane road, and yet it feels worlds safer than the sitting duck experience offered here. 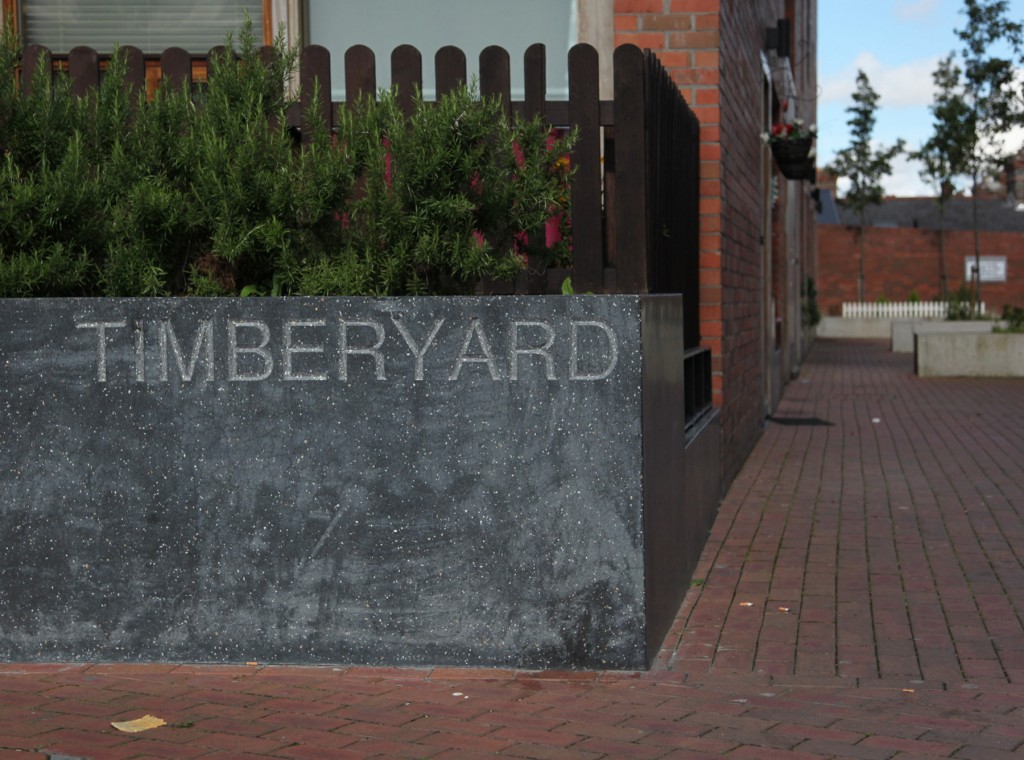 I love the Timberyard. No building is without its flaws, but there’s so much done right here and it would be to Dublin’s benefit to recognise why and how this works.