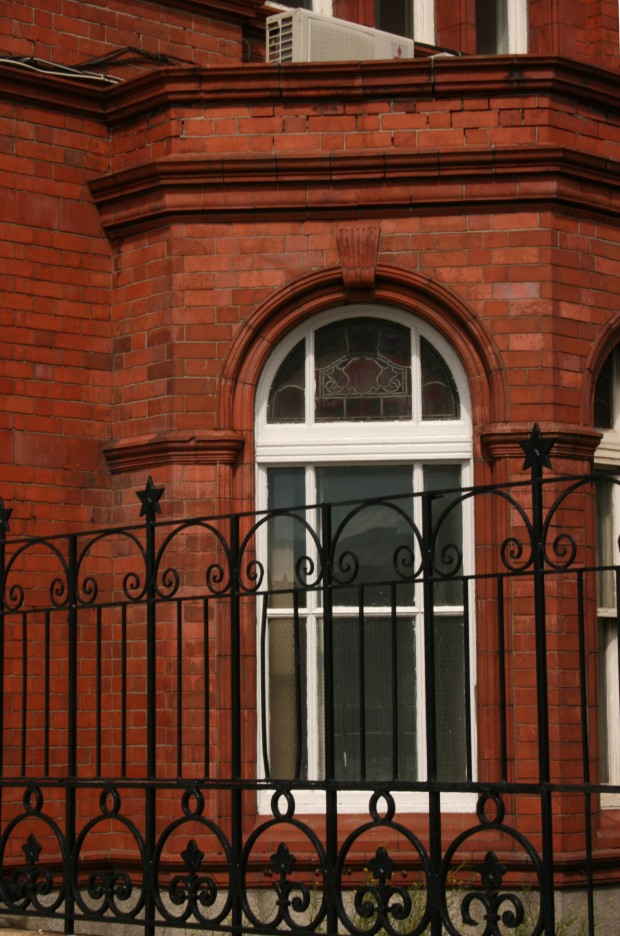 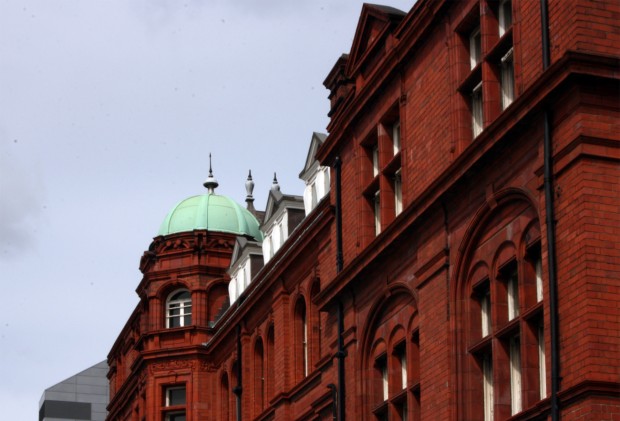 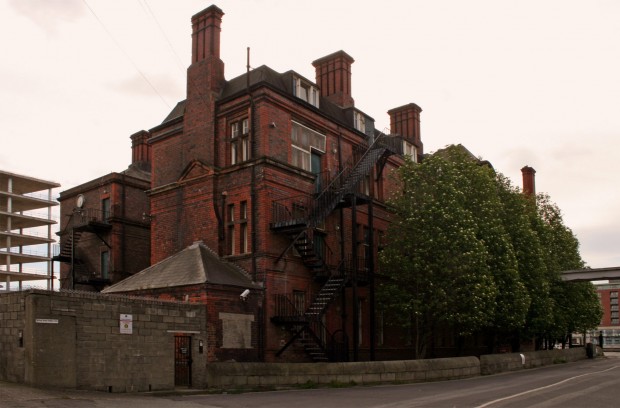 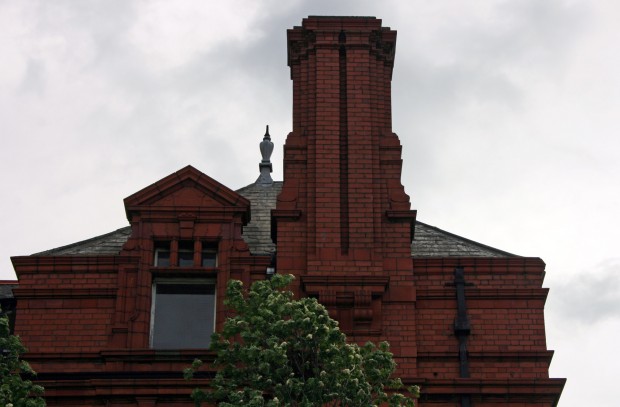 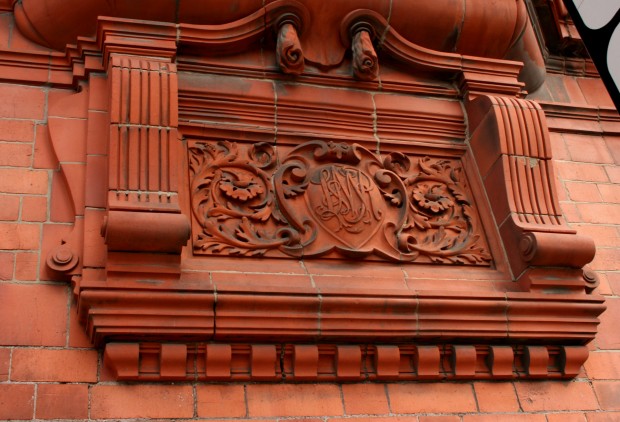 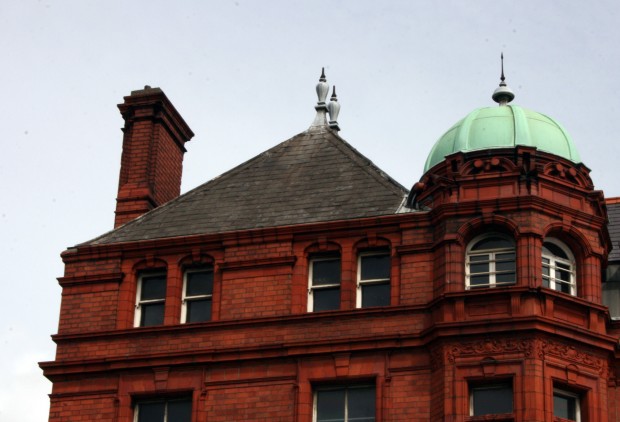 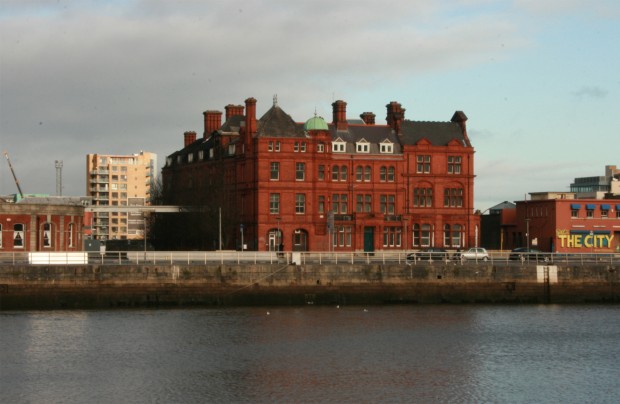 Located right beside the North Wall railway station, the London and North Western Hotel was built to accommodate passengers arriving on the steamer service from Holyhead, replacing a previous hotel (The Prince of Wales) on the site. The hotel is named for the London and North Western Railway Company, which moved its Irish steam packet terminus to the North Wall in 1861, and it was renamed for British Rail when the LNW and other services were nationalised in 1948. It later became offices for Irish Rail, and the building now appears to be empty. A recent listing for commercial rental describes the interior as being in need of renovation but retaining many original features, if you happen to have €250000 handy. 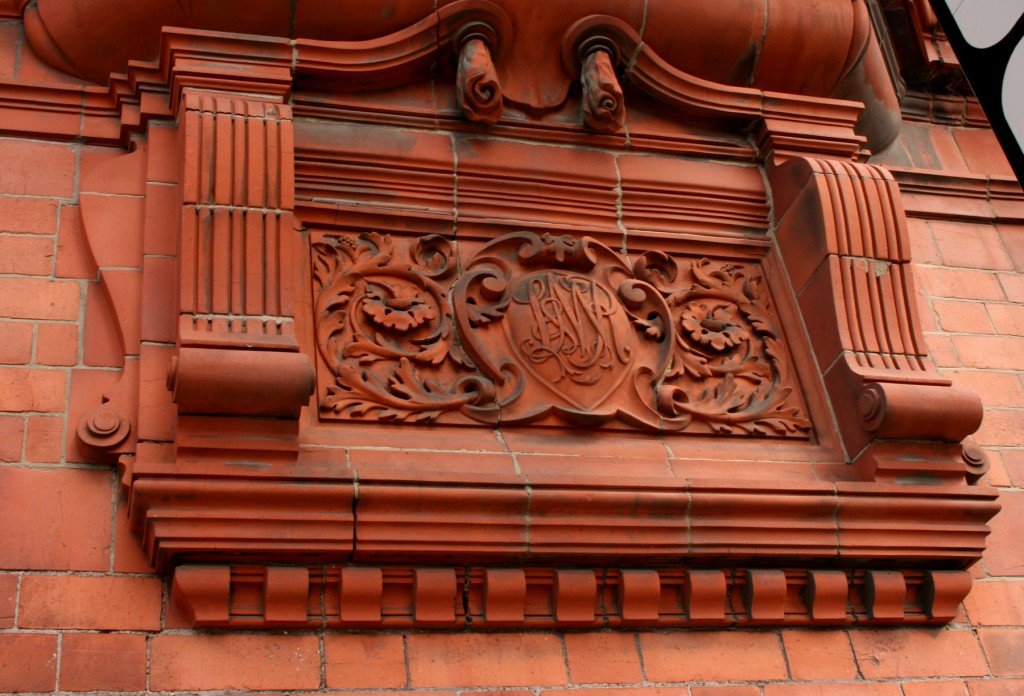 Frustratingly, I’ve yet to find the name of the architect or a confirmed date of construction. Archiseek lists it as 1884, which is probably right, and The Irish Times mentions labourers working on the building in 1896 (in the context of a union dispute) which may have been renovations, but I’d still like to find more sources. 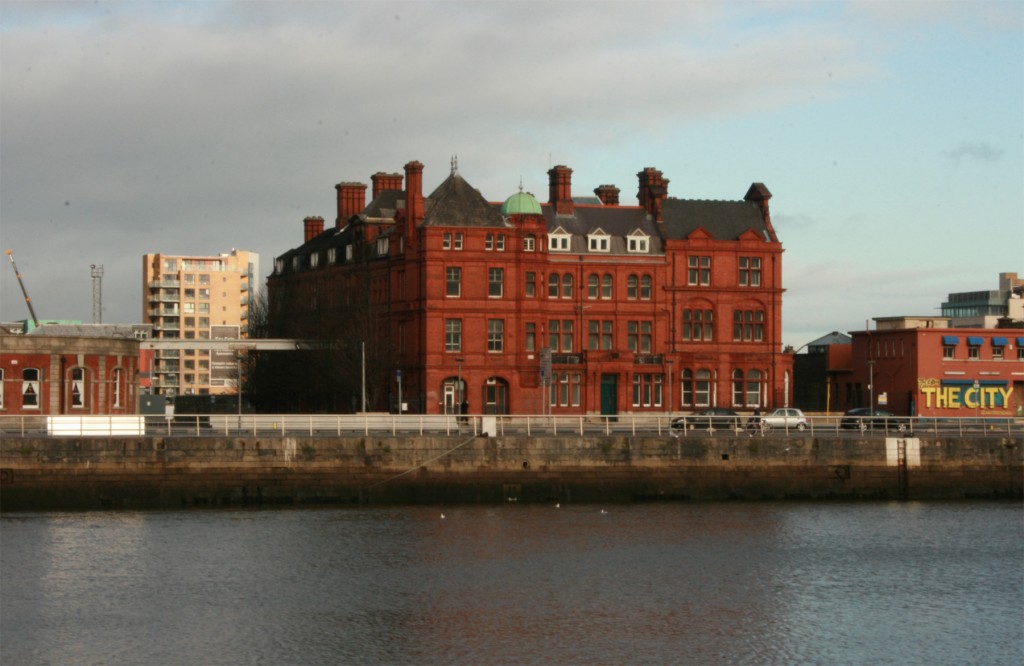 The building sits quite exposed on the quay, with long views presenting it like a solid, self-contained object in the area’s confused building fabric. It’s quite surprisingly asymmetric, given how neat and ordered it looks – the central bays are pretty symmetrical, but to the left and the right, even the parapet heights are different. Across the facade, you can read a series of horizontal lines that might provide a datum to read it as gridded, and the steep pitch of the roofs and the deep grooves in brickwork of the tall chimneys introduce a verticality as if to counter that. 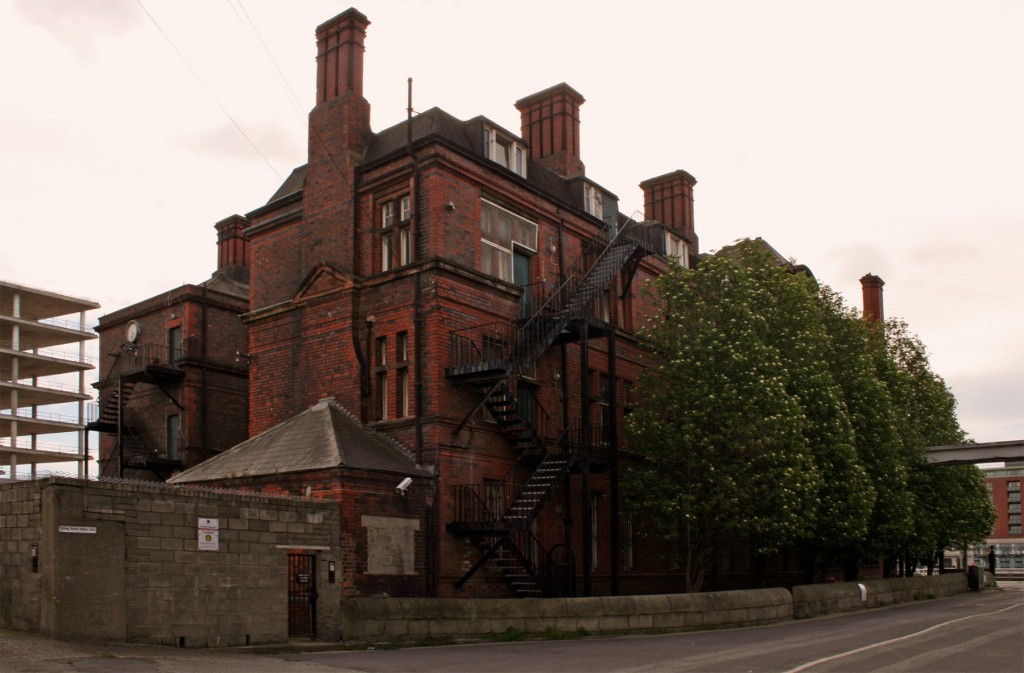 It’s a U-shaped plan, open to the rear. The brick treatment on the wings is a little different to the front – the river facade is quite pristine in red brick and terracotta, while the wing facades introduce more brownish, purplish tones in the brick (with the windows edged in red brick), with a sort of tweed effect. 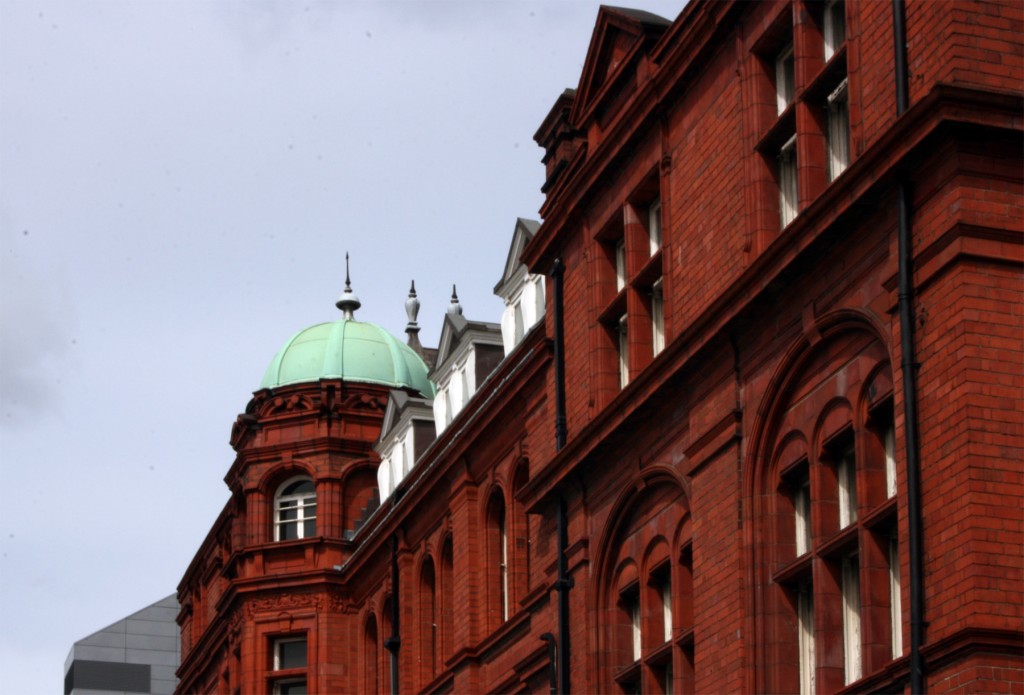 The little pediments along the right side of the roofline and above the dormer windows resonate with one another, too, before being terminated by the copper dome. (Behind the dome’s own finial, there’s another pair at the highest point in the roof.) from National Library of Ireland on The Commons: “This shot of joking Black and Tans and Auxiliaries was taken outside the London and North Western Hotel, North Wall, Dublin as they surveyed the damage after an I.R.A. attack on their quarters. Written on the mount of this photo was “Tans glad to have escaped the bombs thrown at their headquarters in Dublin”.”

The building appears here behind the Black and Tans and the Auxiliaries, who were based at the hotel – it’s a very strange image to see, even as someone who looks at images of Irish history and misses most things that aren’t buildings, signs or other design. Right in the middle of the group, though, you can see that the star-shaped railing was in place in the 1920s, and the timber on the windows was a dark brown rather than today’s white. (The NLI image is of the front right, while the one below is around the corner to the right.) 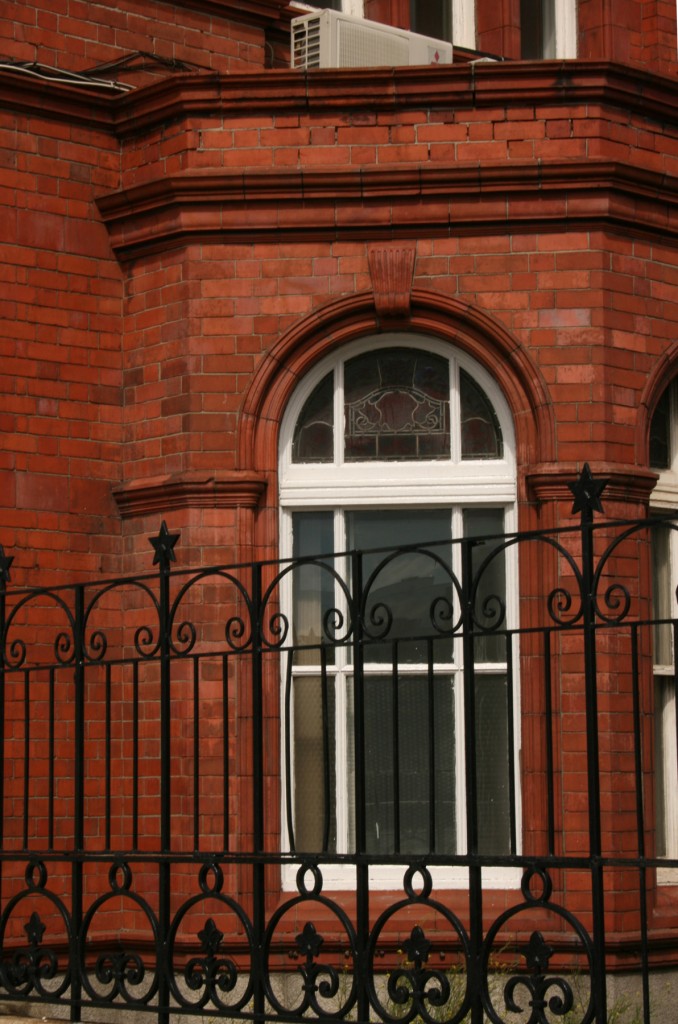