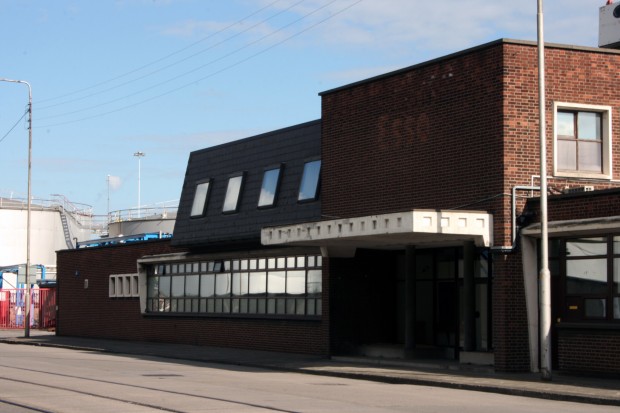 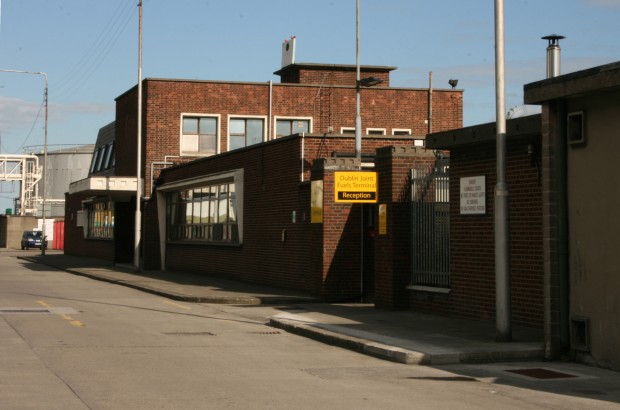 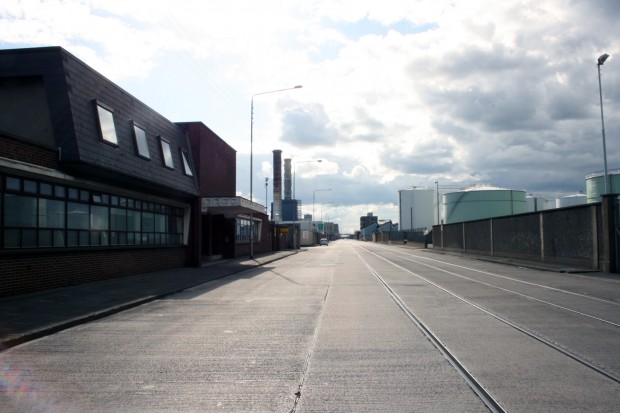 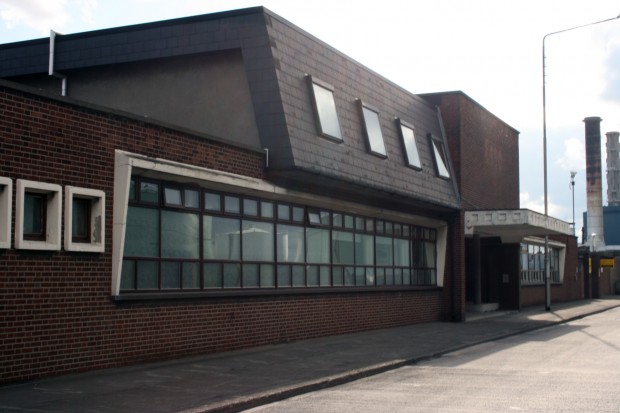 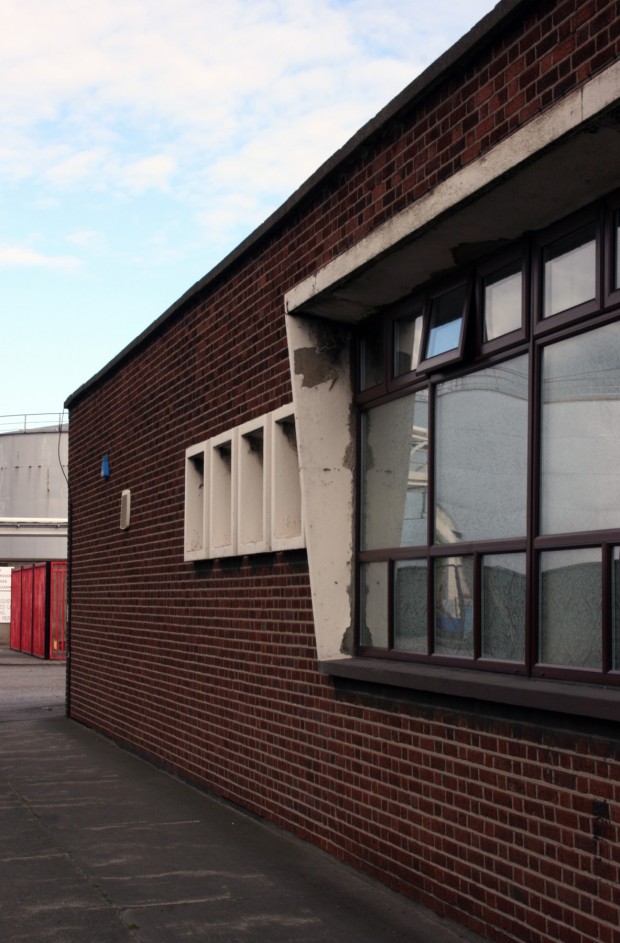 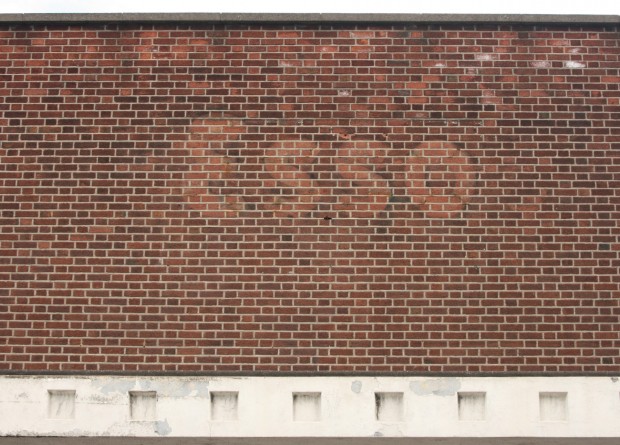 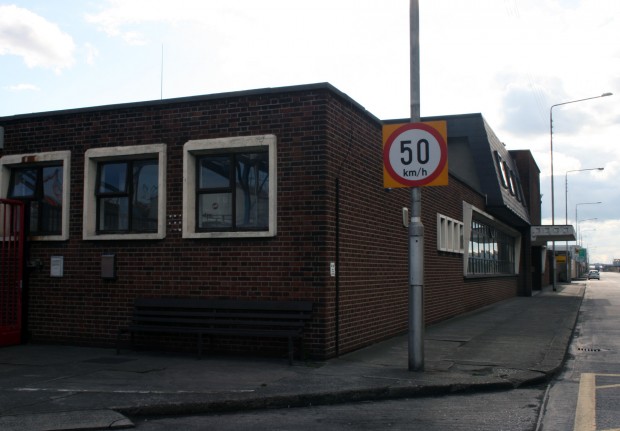 Dublin Port is a bit of a world unto itself, a spur projecting from the city, run around the tight logistics of freight and ferry services. It’s a part of Dublin that still feels slightly unfamiliar to me, known points standing in the middle of a much greater unknown. There’s a mixture of industrial buildings, storage, cranes, offices, and the whole spectrum of shipping containers, and the only problem is figuring out where access and photography are permitted. 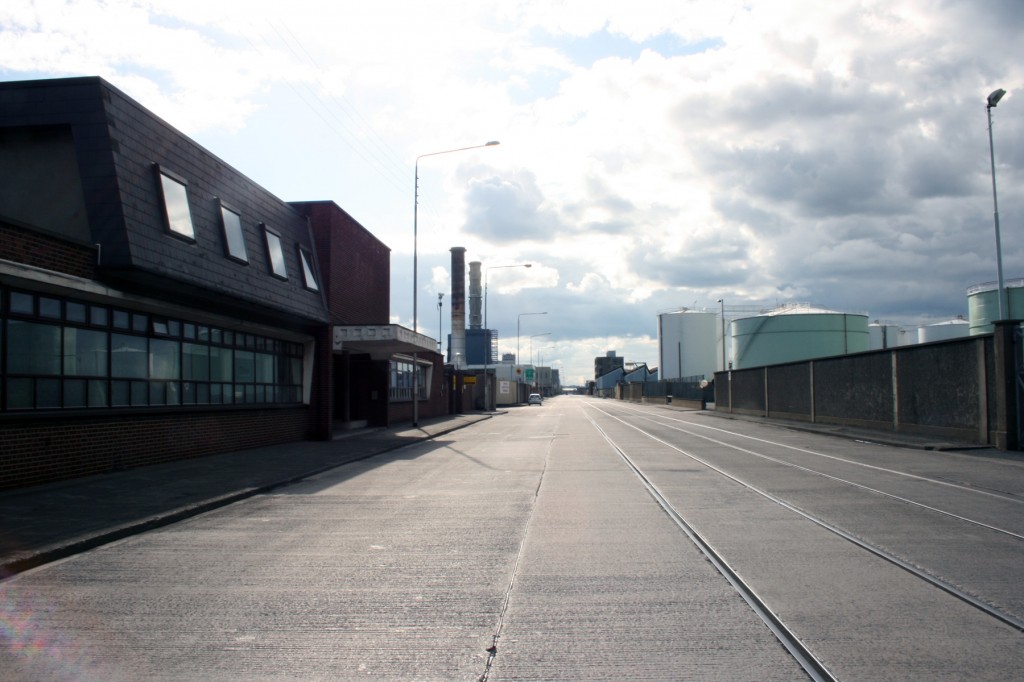 The Joint Fuels Terminal office building on Alexandra Road isn’t up for photography, but I’d taken these before a security guard asked me (very nicely and gently) not to photograph it any more. The fuel depot became Joint Fuels between Esso and Texaco in the 1990s, but Esso were located here from the 1950s – there is an exasperating lack of information on this, but it was nearing completion in 1951 and in use as an address in 1952.

Update: I received an email from Ailish Greene, who kindly supplied the following information and seems to have solved the mystery:

My late father, William Greene may well be the architect of the depot.  He worked as one of two architects in Esso from about 1950 until his retirement, about 1982.  He designed  a large number of the Esso garages around the country during that time.  I feel sure he would have got Eamonn Costelloe the work on the stand because they were great friends. 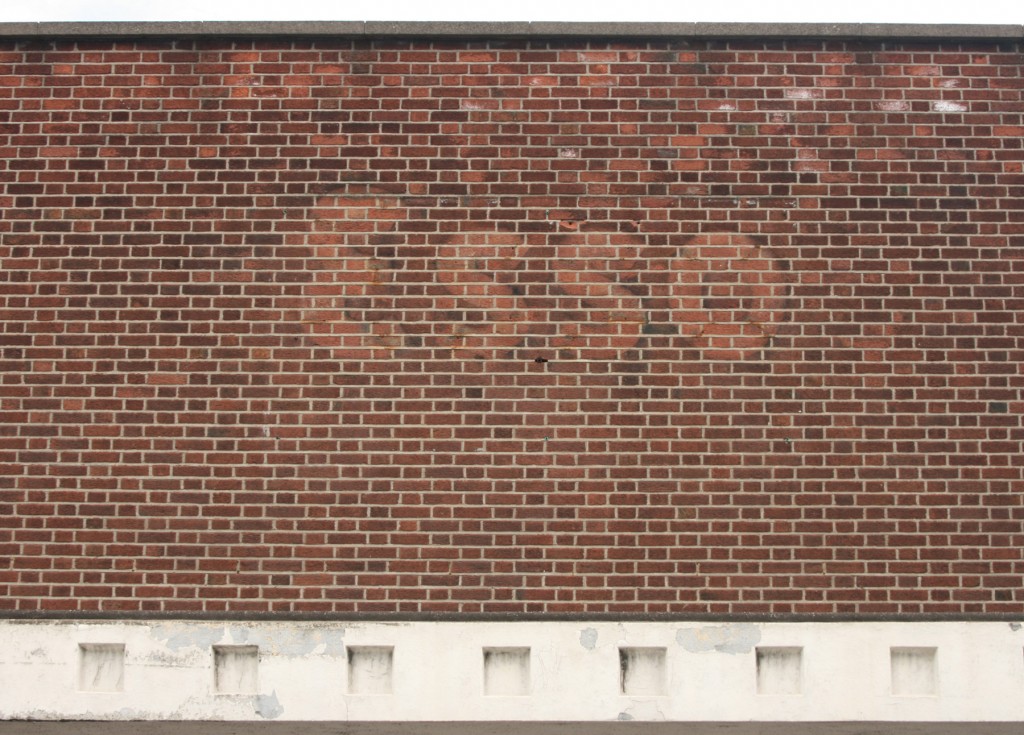 At one stage, I thought I’d finally got the name for the architect:

“The stand acts as background for a model of the new petrol storage depot at Alexandra road, Dublin, now nearing completion. The designer is a young Dublin man, Eamonn Costelloe, and the display was made by the Artel Group, who also made the models in the CIE stand.” The Irish Times, August 9 1951, p4

Unfortunately, it turns out Eamonn Costelloe designed the stand for this show in the RDS – he is later listed as an artist working on the CIE stand – rather than the building itself. There’s no big fanfare turning up in any of the newspaper archives, and even a slightly bizarre 1998 piece in The Irish Times on Esso’s 100-year anniversary in Ireland (starting as Anglo-American Oil, then Irish-American Oil, then…) neglects to mention Alexandra Road or the building project at all. 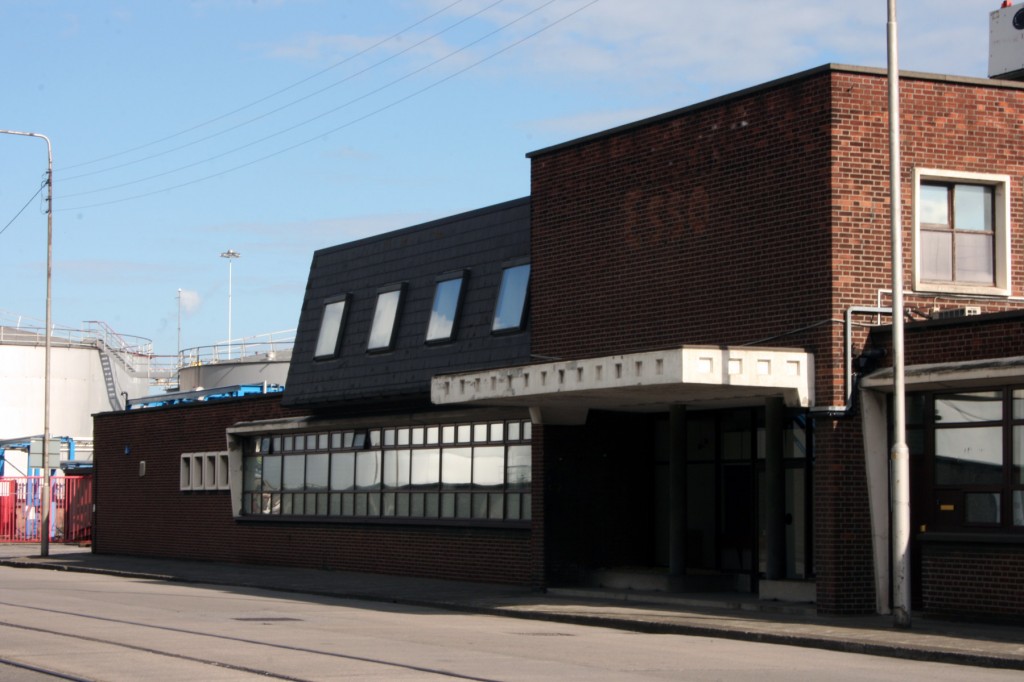 The building reminds me a lot of Donnelly & Martin’s slightly earlier one for the college in Ballsbridge, with the same tapered hood over the windows. The entrance canopy here is obviously much more chunky and heavy, and the other windows are smaller, though their individual surrounds are quite lovely against the brick.

The building is a low range in front of a deeper site for the depot, and its near-symmetry is broken by the overhanging second storey – I can’t imagine this was part of the original, given how heavy and clumsy it looks in relation to the total massing, but I’ve nothing to go on but guesswork. 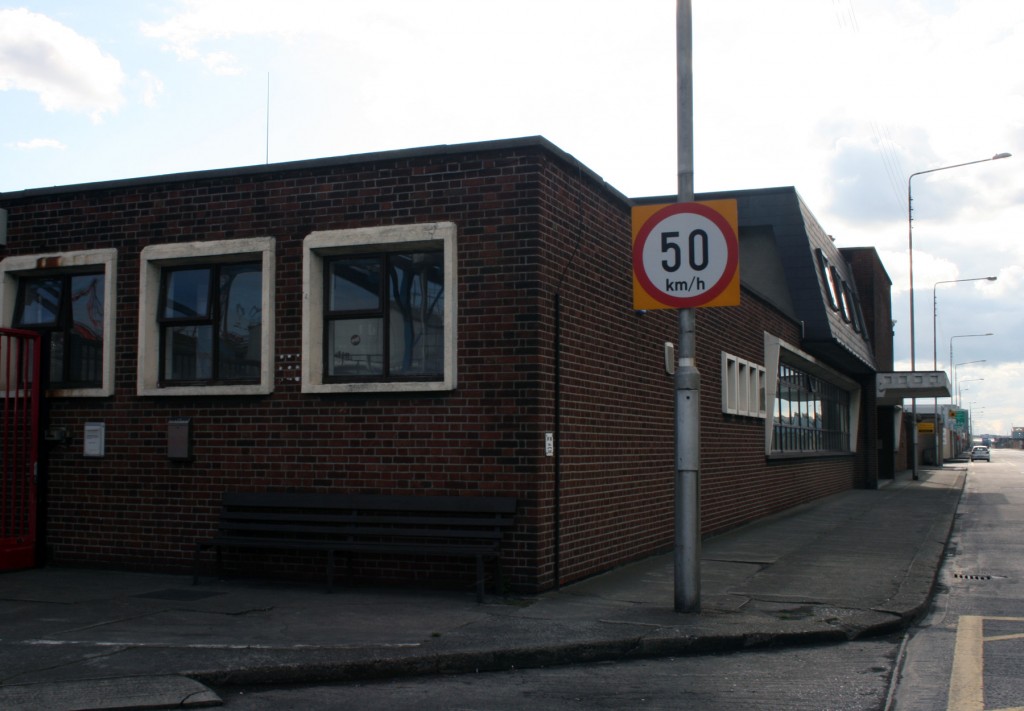 The other break in symmetry looks to have certainly been part of the original – the windows to the right of the door terminate in a vertical fin going almost to ground level, while those to the left keep the tapered or fin elements just from lintel to sill. 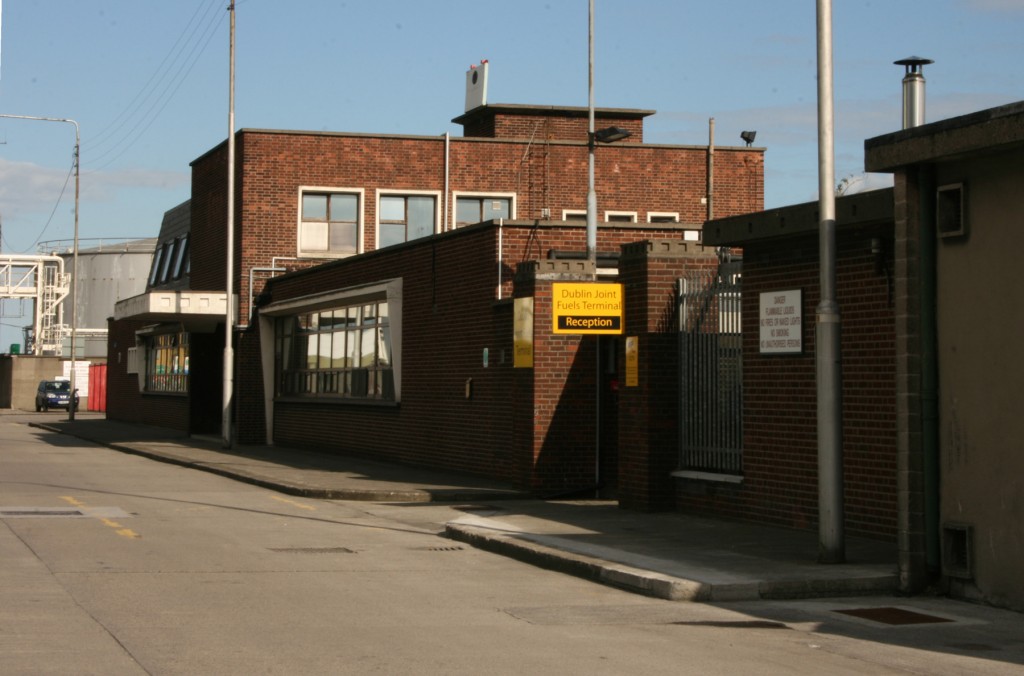 The building looks well-worn, but in spite of some peeling paint, the attraction of what must be the original form is still there to see. The combination of the cast window forms and the shades of red and brown within the Flemish bonded brickwork looks good, and the ghost of the old logo above the door reminds me of Elizabeth Bishop’s poem ‘Filling Station’:

Somebody embroidered the doily.
Somebody waters the plant,
or oils it, maybe. Somebody
arranges the rows of cans
so that they softly say:
ESSO–SO–SO–SO

to high-strung automobiles.
Somebody loves us all.

That’s really quite nice, and it resonates for me with these interesting built forms in their primarily function-oriented context. 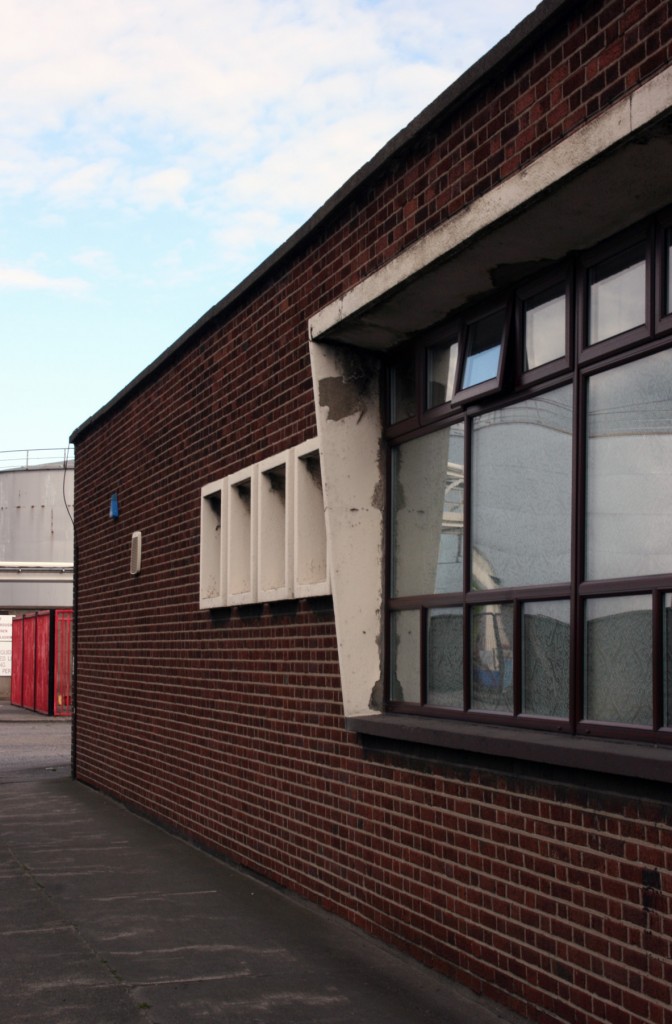