There’s a bittersweet recurring motif you’ll probably notice if you spend a while looking into buildings in Dublin – a flurry of activity in the mid-2000s about planning or demolition on a building’s site, with a back-and-forth of opinions happening over a short period, and then absolute silence. The building will still be standing, still empty, and the potential mapped out through planning and design just sits there unactivated. There’s an obvious upside if you’re a building fancier, but it adds to the strange condition the city has taken on during the recession, of architecture going into hibernation, of wondering whether the old plans will suit the new city’s needs once we start thriving and stop emigrating. 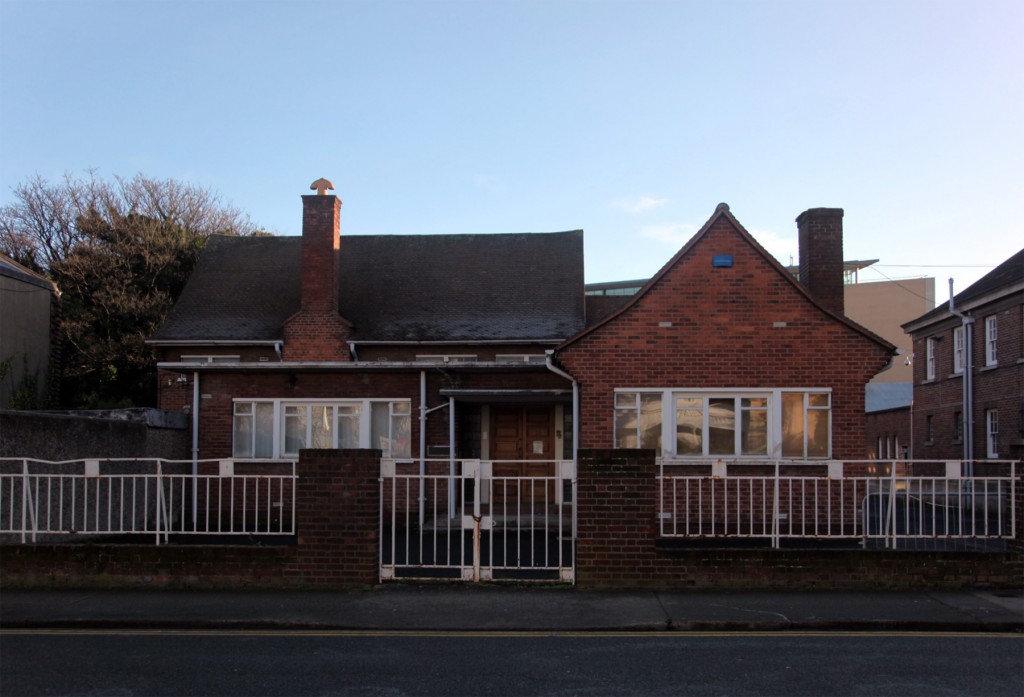 The former Film Censor’s Office had this mid-2000s activity, tied to the question of redeveloping the adjacent Garda barracks site. Both buildings were designed by the OPW – the barracks in 1948, and the Film Censor’s in 1943, by William Henry Howard Cooke and Oscar Leech. Christine Casey (Dublin, p.527) notes that the Film Censor’s is “remarkable for the employment of pre-cast concrete rafters in response to a wartime timber shortage.” (As well as being interesting within the history of design and construction, that’s got me wondering about pauses and latency periods within construction cycles.) 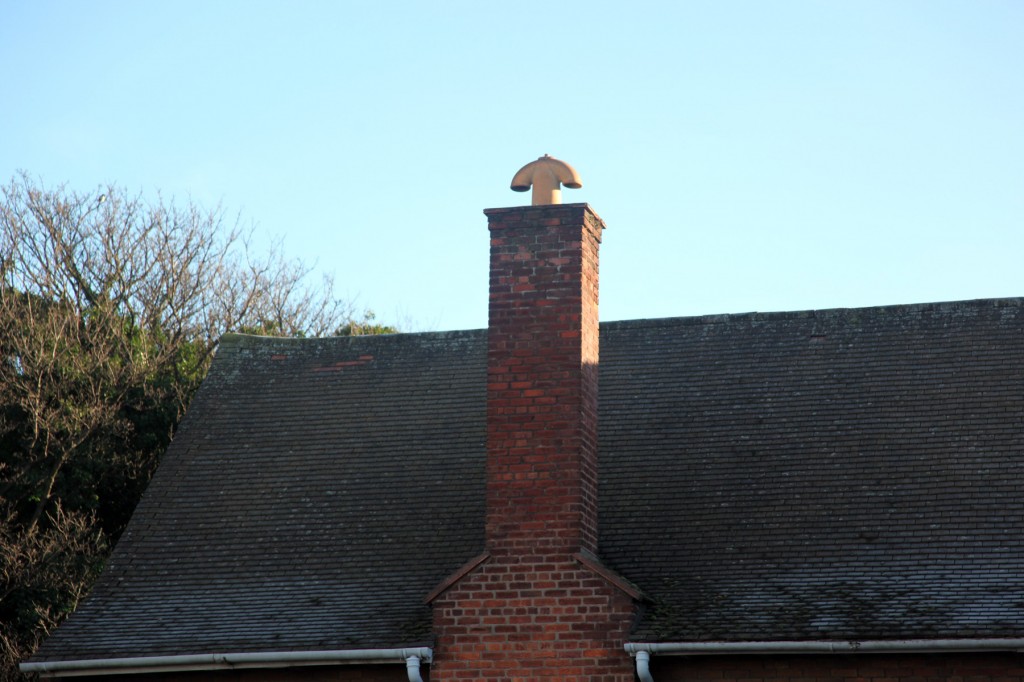 I’d mistaken the building for a former school, maybe trying to reconcile the site and scale with the domestic aspect to the deep site and steeply pitched roofs. The roofs swing down through a steep pitch to a slightly shallower one, with the brick stepping out on the gable beneath the gutters, echoing the angle above. In between, the chimneys pierce through, bringing their own short pitched roof sections, like a collar around the neck of each brick stack. There’s an Arts and Crafts feeling to it in the folksy, crafted quality of the roof and brickwork, and yet the concrete beams add an interesting element of concealed modernity. The windows feel more modern (and contemporary to the 1940s) too, framed as if they’re strips rather than cut-outs. 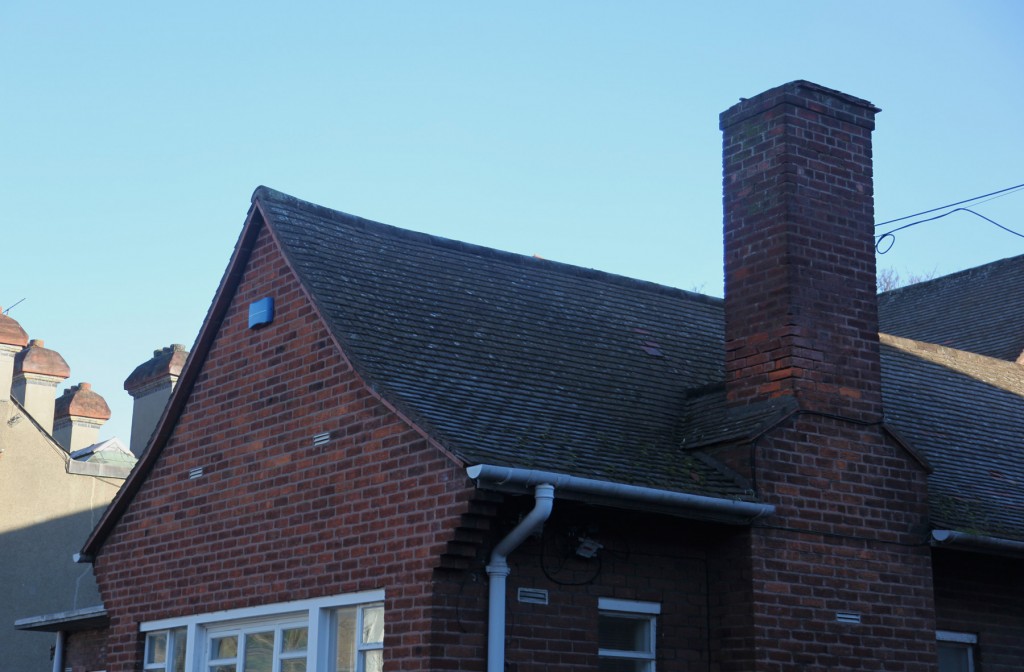 At these points where the pitches meet, the higher roof sits like a gablet, and the ventilation detail is quite nice, a pattern punched out of the brick array. 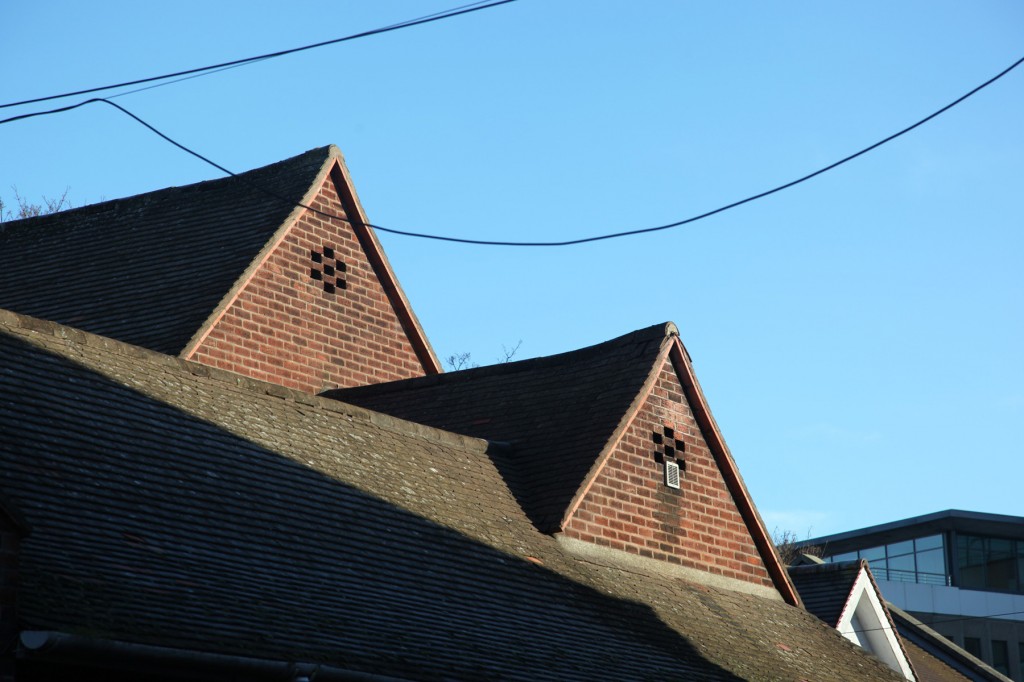 Above the entrance, there’s a flat roof sheltering the panelled door and the glass blocks to either side. It seems apt: the building feels like a mishmash of stylistic elements, but pretty charming and appealing all the same, and the panels on the door feel like they’re hedging the same bets. It’s more interesting to me than the Regency terraces opposite, but it seems likely that there’ll eventually be another push for it to go and to be replace by something ‘contextual’. In the meantime, we get a little while longer with this strange silhouette. 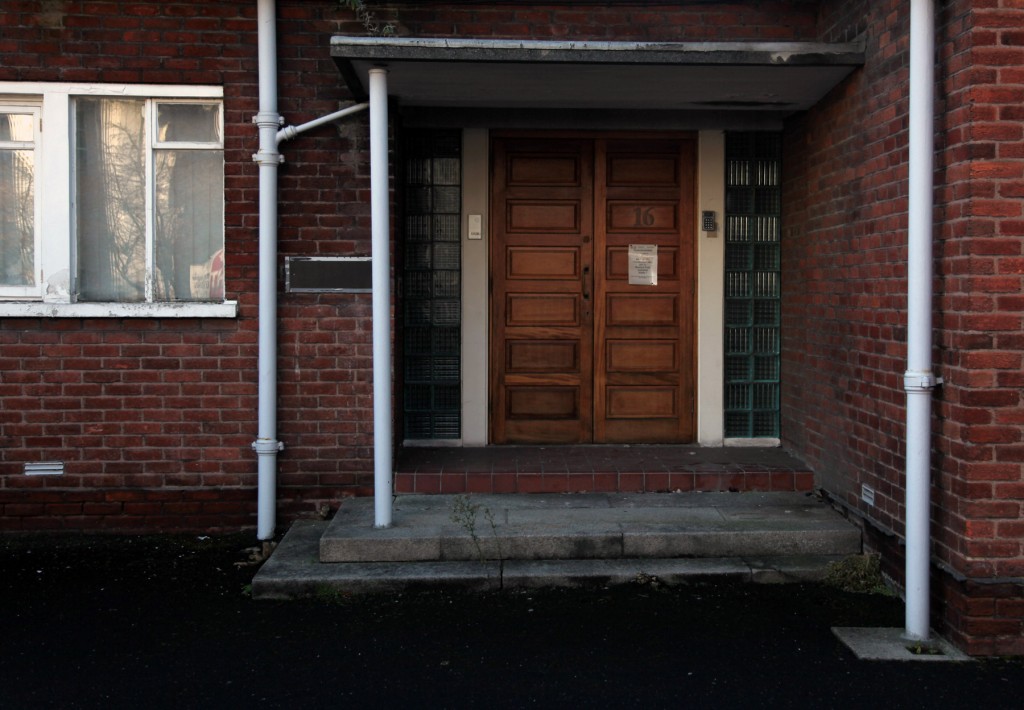