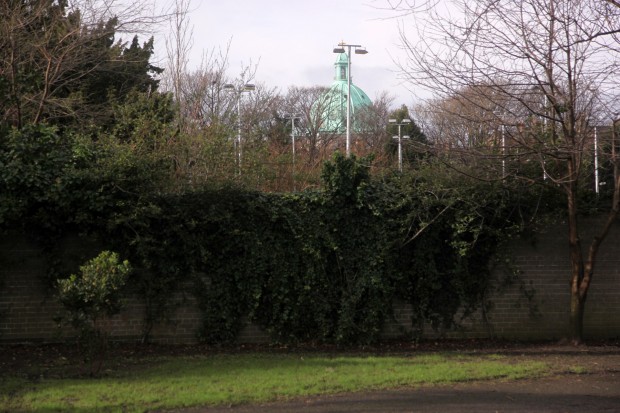 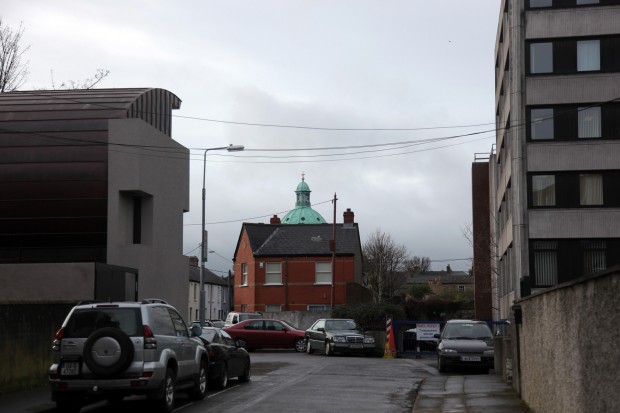 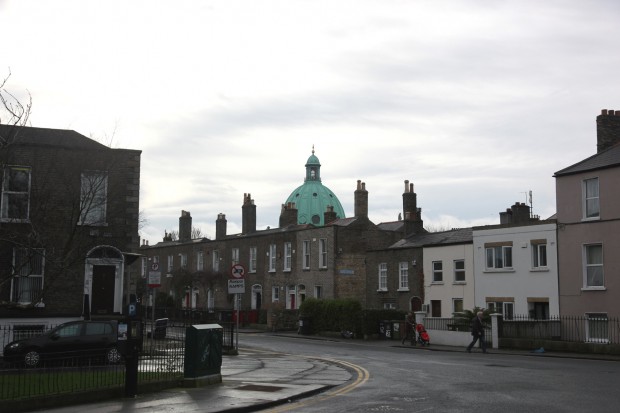 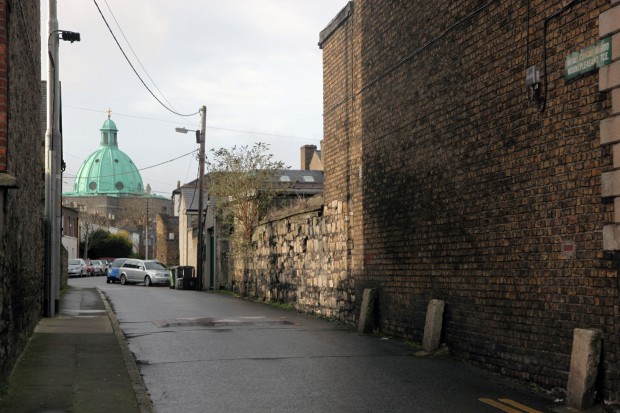 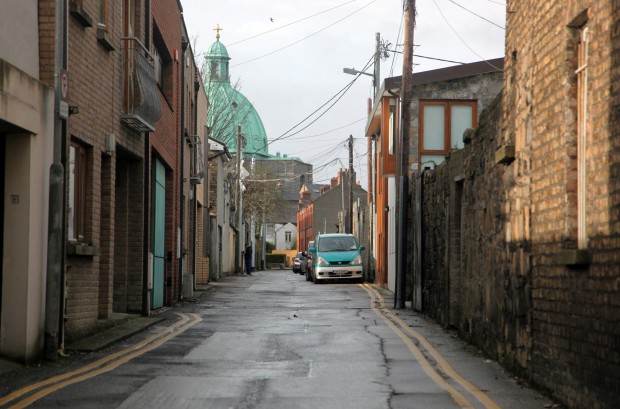 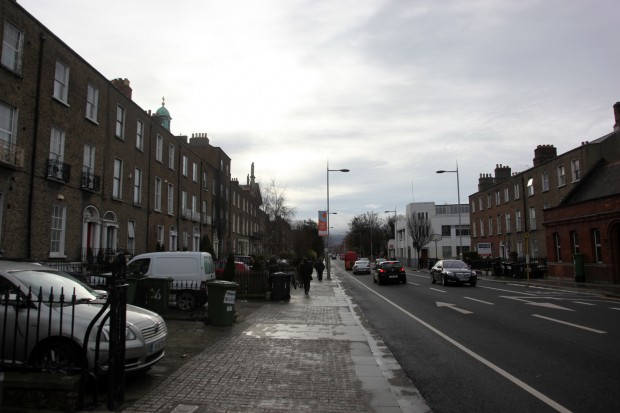 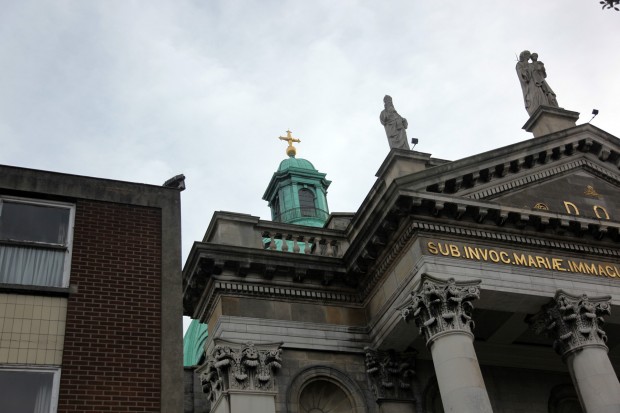 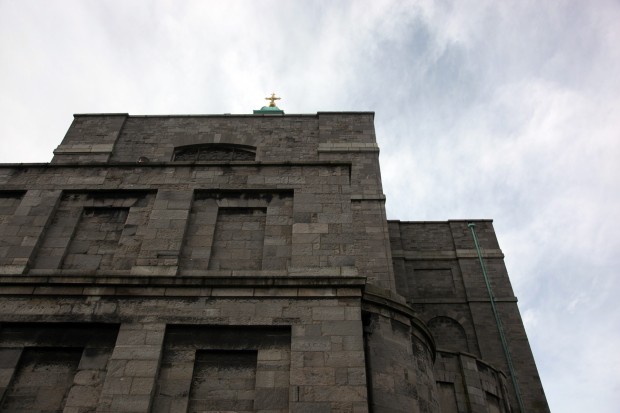 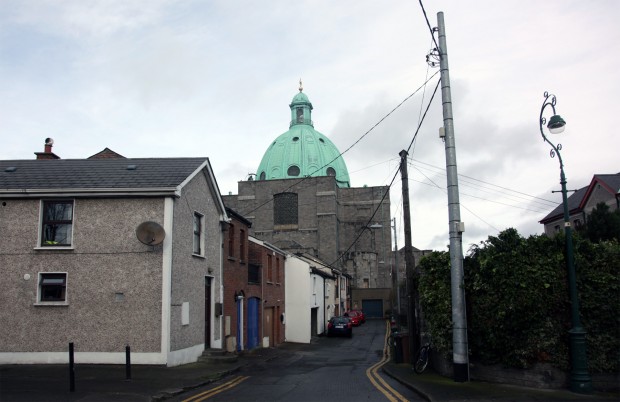 On the stretch of Lower Rathmines Road that contains most of the urban village, there are two tall landmarks: the Town Hall, and the dome of the Church of Mary Immaculate. Though each of them casts an influence over the surrounding area, marking a sort of radius for ‘Rathmines proper’ in each direction, the Town Hall is audible rather than visible from most sides, while the dome pops into sight frequently. 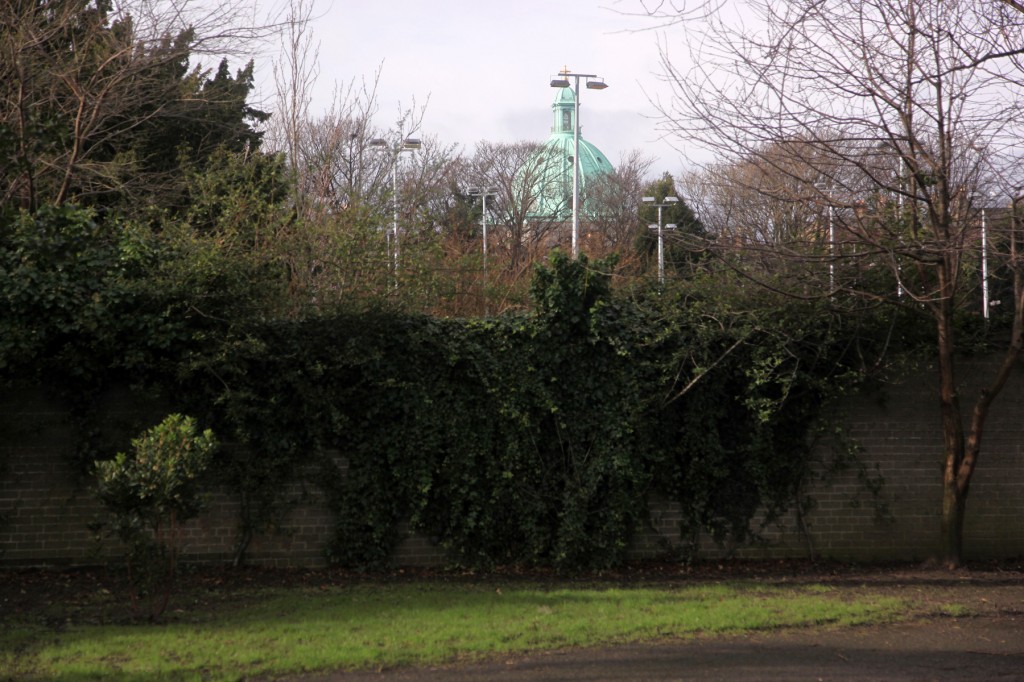 From Ranelagh Road, it appears above Mountpleasant Square, and sits at the centre of the side-roads as you approach the canal. There’s no optical magic, but it does start to feel like a Blingee or like an Eiffel Tower background in PhotoBooth, as if Rathmines is inserting itself symbolically into its streets. The scale makes it function like this when you view Dublin from above, with the dome as one of the orienting points as you look down, whether’s it’s from Phibsboro, the quays, or Dolphin’s Barn. 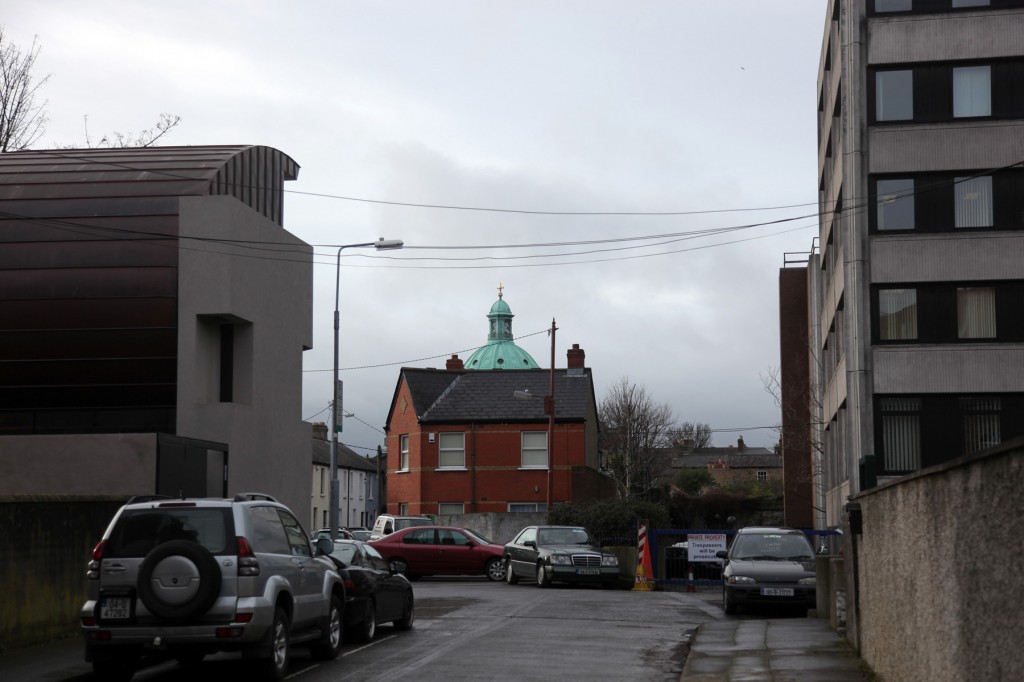 This particular dome was rebuilt in 1923, following a fire in 1920 which devastated the church and brought the previous dome down with a crash – all that remained was the sacristy and the shrine to Our Lady of Perpetual Succour. The original church was completed in 1856, designed by Patrick Byrne and featuring interior sculpture by Farrell & Sons, and it was extended by John O’Neill and William Henry Byrne (no relation?). Following the fire, Ralph Henry Byrne (William Henry’s son) was responsible for the restoration.

There’s a rumour that the dome was originally intended for an Orthodox church in Russia before the 1917 revolution, but the reports on rebuilding from the time don’t appear to mention this. Instead, there’s detail of the construction: “The dome will be about 61 ft in diameter at the base when covered with the timber sheeting and copper, and it rises 48ft over the general roof level. The lantern on top, being 42ft more, makes, in all, from the ground to the top of the cross 160 ft. It is carried on four steel lattice girders spanning the nave and the transepts of the church, weighing nine tons each. It will be sheeted with timber on the outside and covered with copper, the inside being bridged with timber joists, and covered with fibrous plaster. It will be a much more ornate dome than that existing before the fire, as well as being much higher.” (The Irish Times, April 19, 1923, p.5)

The report goes on to note that the construction was done without affecting the use of the chruch below, which had a temporary roof in place. 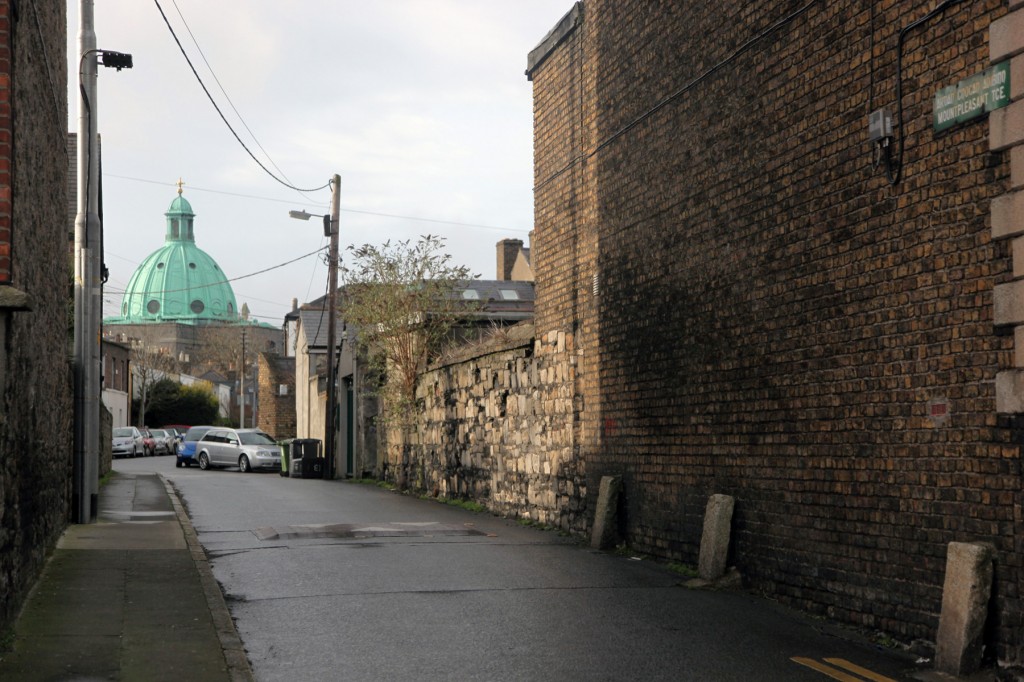 Right. The other thing is the dome’s visibility, which brings up something I hadn’t fully considered: the dome of a church functions like a beacon to its surroundings, asserting itself as a symbol of control or faith or power or community depending on the viewer’s response, and its role is to be a landmark or a lighthouse. There’s also the question of grandeur and the trusty architectural standby of expressing God’s glory through ornament or through simplicity or light, and something like this clearly reads as an object of wealth and magnificence. 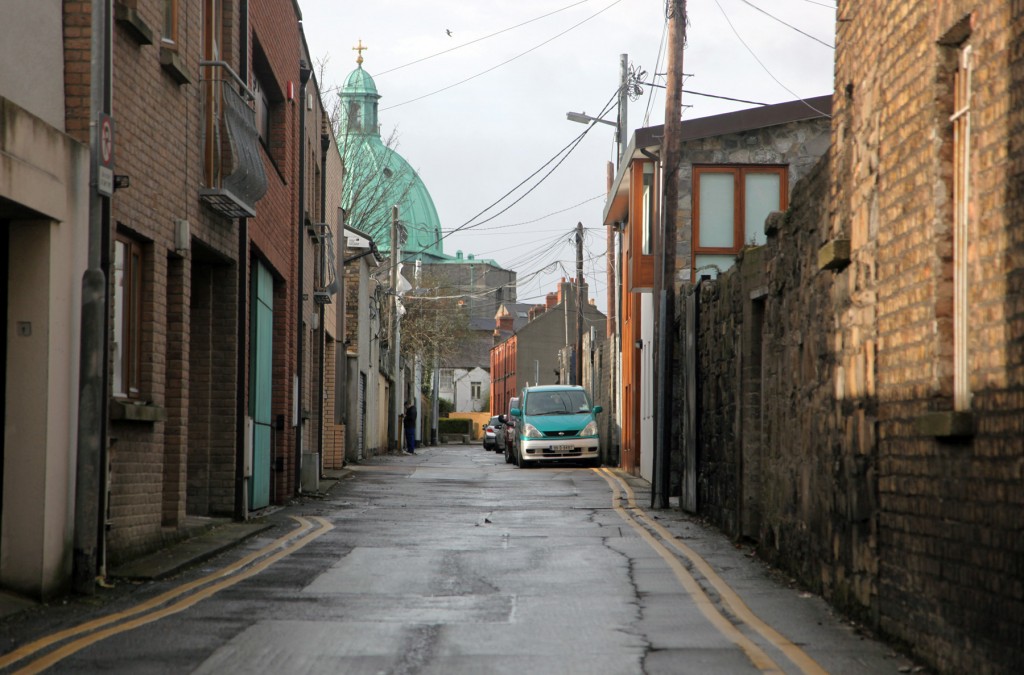 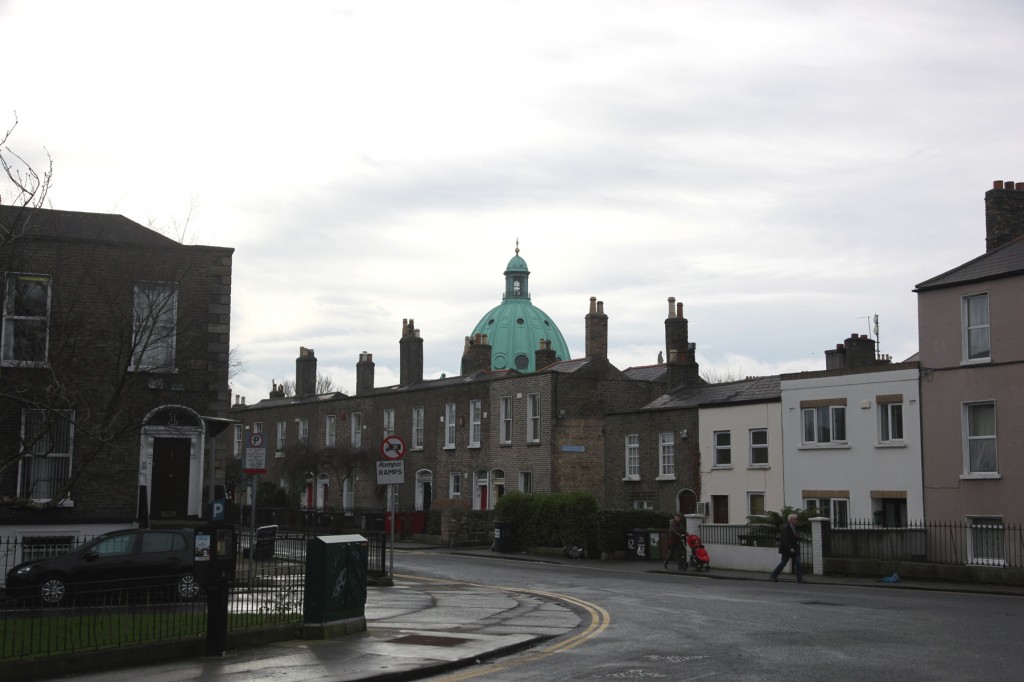 So, although there’s this visibility off in all directions, the dome become nearly invisible as you approach the church. 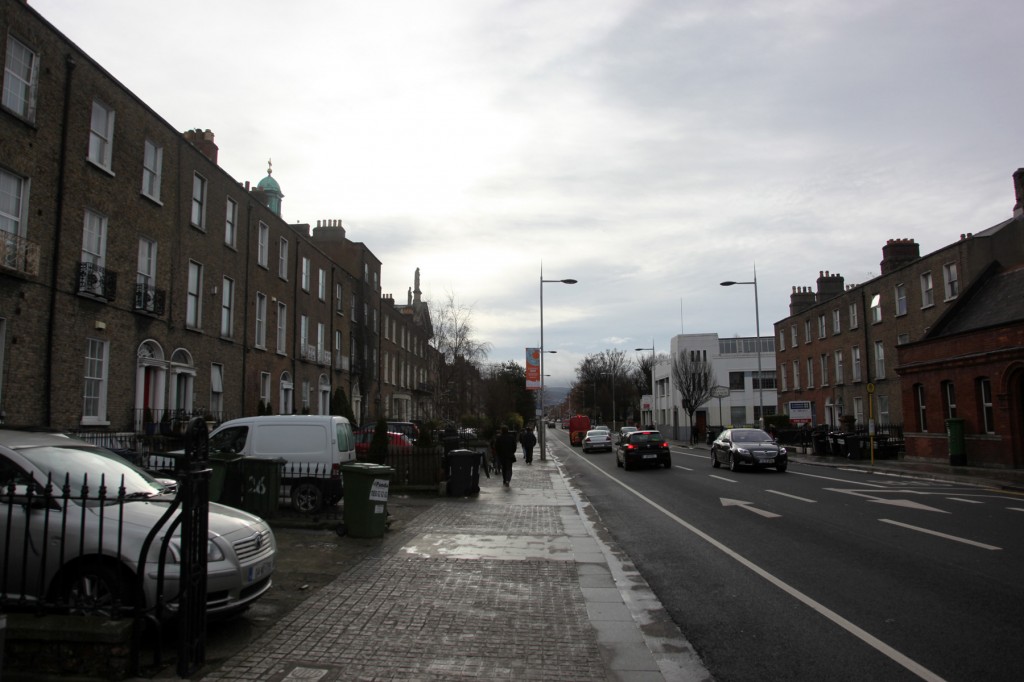 It’s (obviously) located over the altar and so it’s situated away from the Rathmines Road bulk of the building, which screens all but the lantern when you enter though the main door. 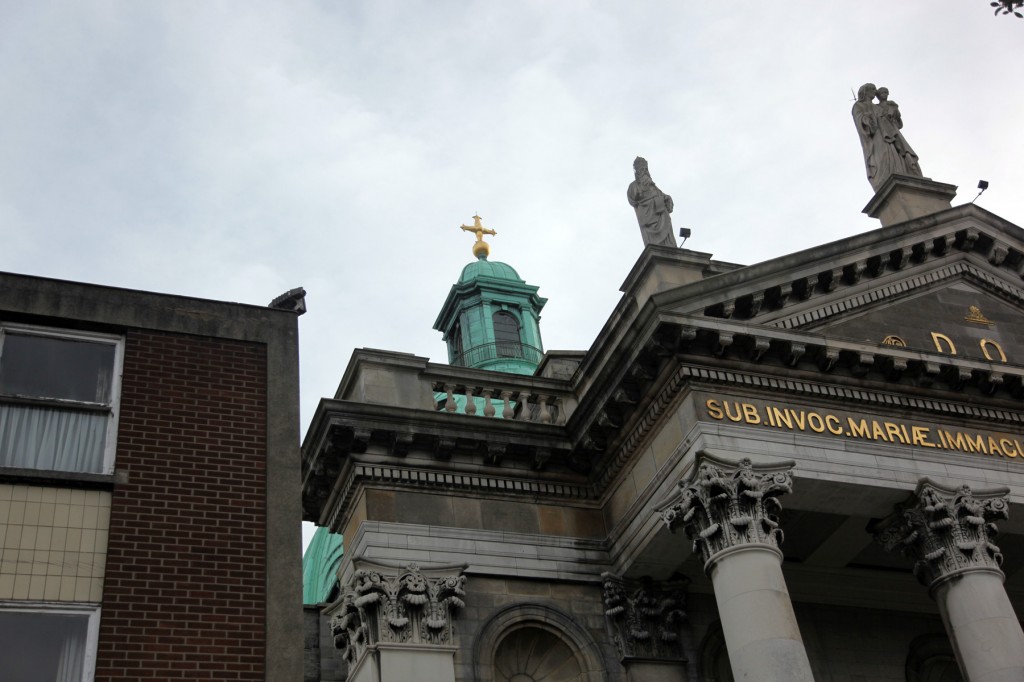 To the side and the rear, within church grounds, this huge copper structure is nearly completely hidden, though the glimpses make it feel like an iceberg masquerading as seafoam: a dinky object hiding the gigantic bulk. The dome’s presence is unmistakable from the interior, where it’s obvious that the dome is a good percentage of the lower building’s size again, but it’s impressive that the church manages to conceal it from the immediate exterior. 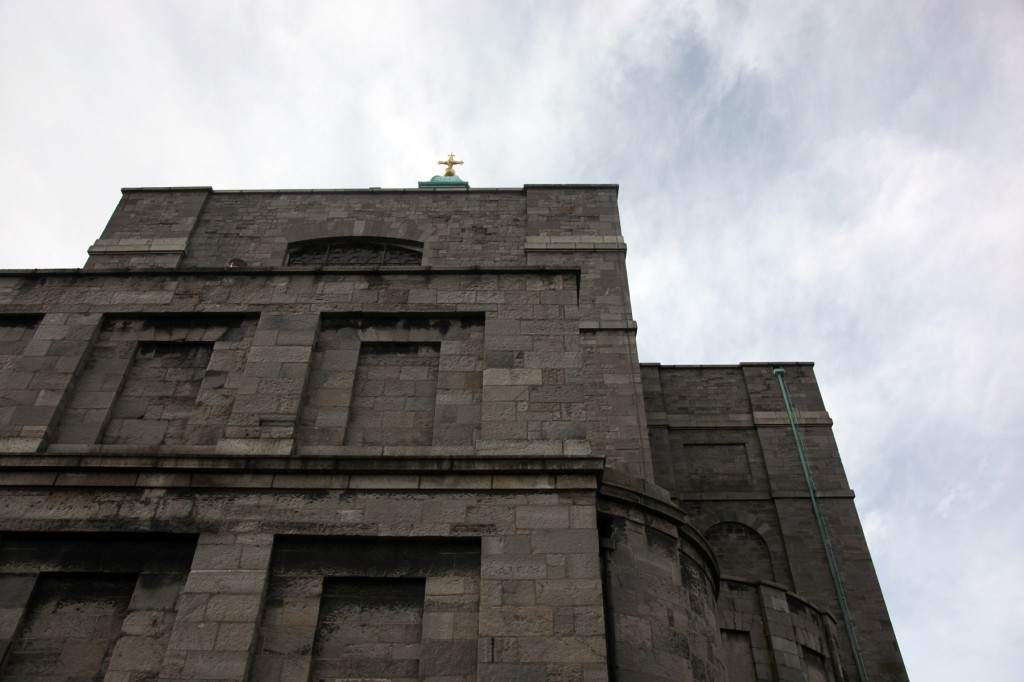 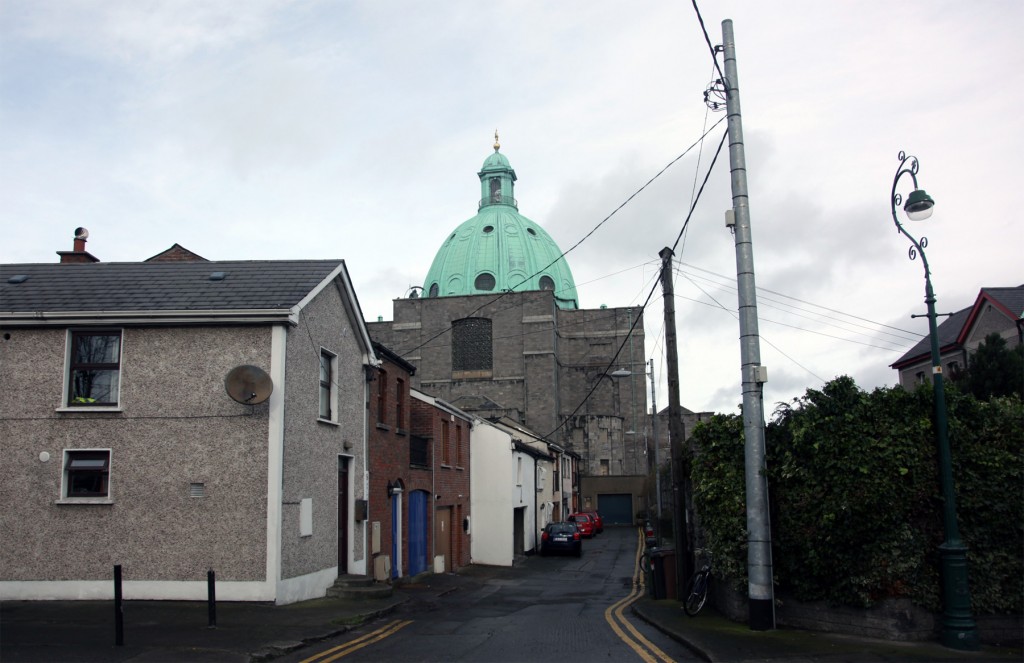