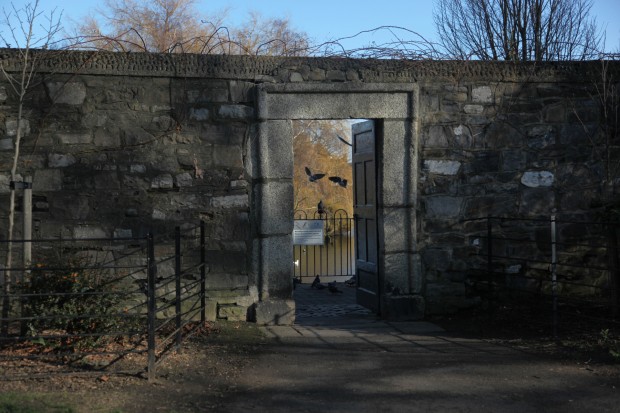 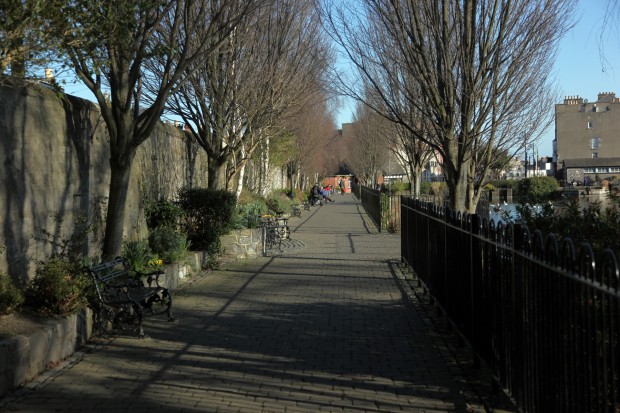 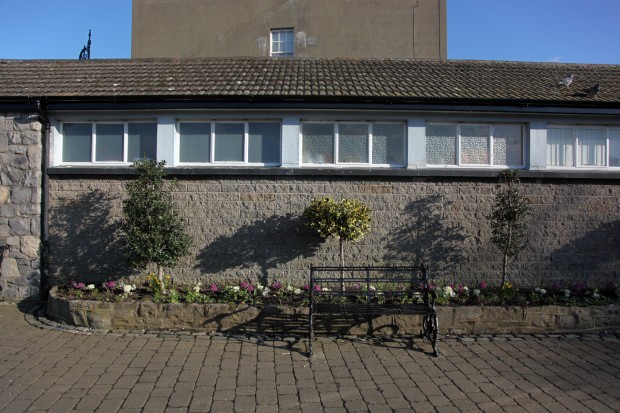 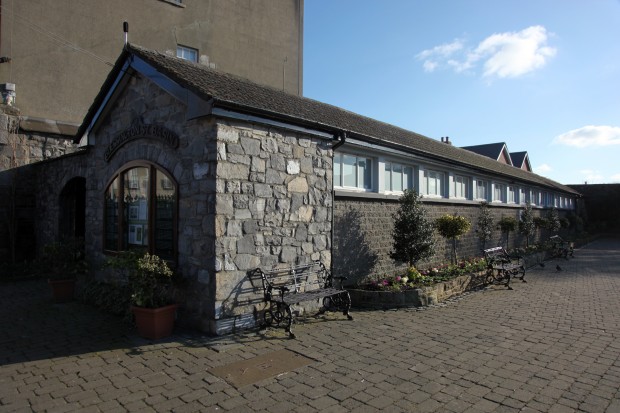 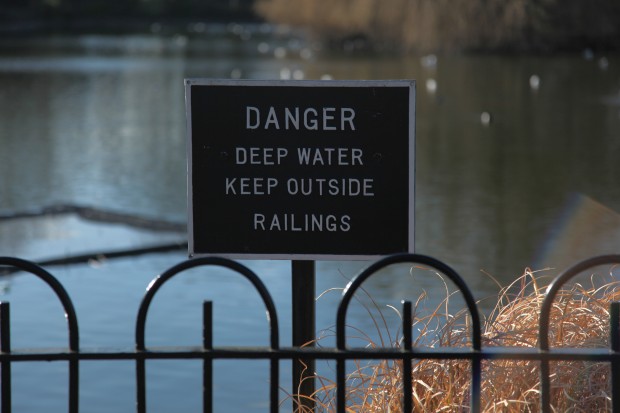 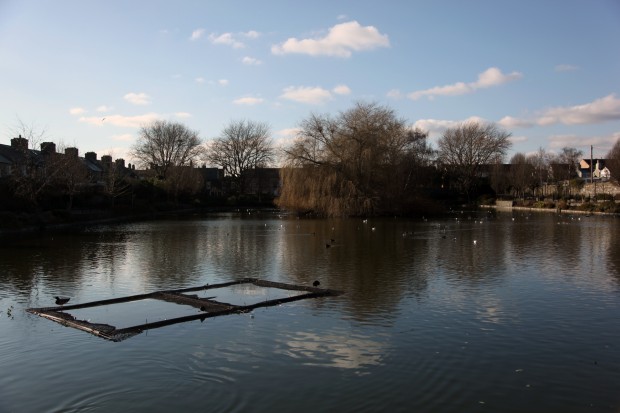 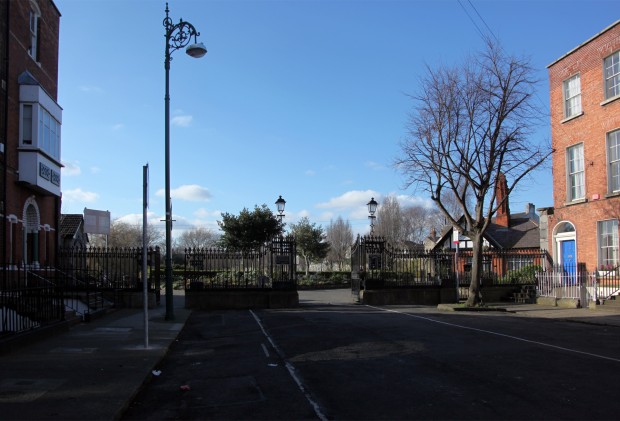 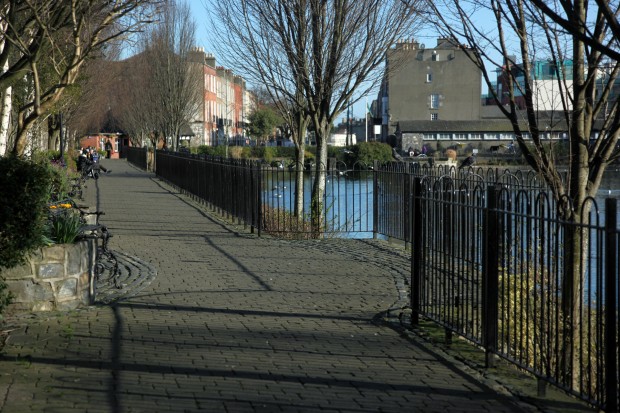 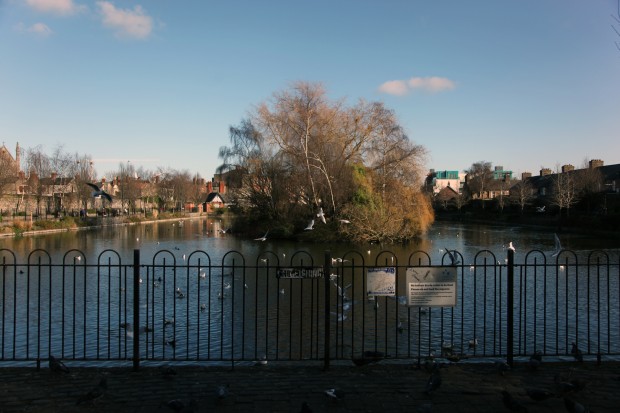 There’s nowhere better for eavesdropping in Dublin than Blessington Street Basin. It’s not a complicated little park, but the varied pace of people passing through and the alcoved shifts in the path boundary make it inevitable that you’ll overhear something, and the park’s success in drawing visitors of all ages and levels of income means that overheard something could be almost anything. 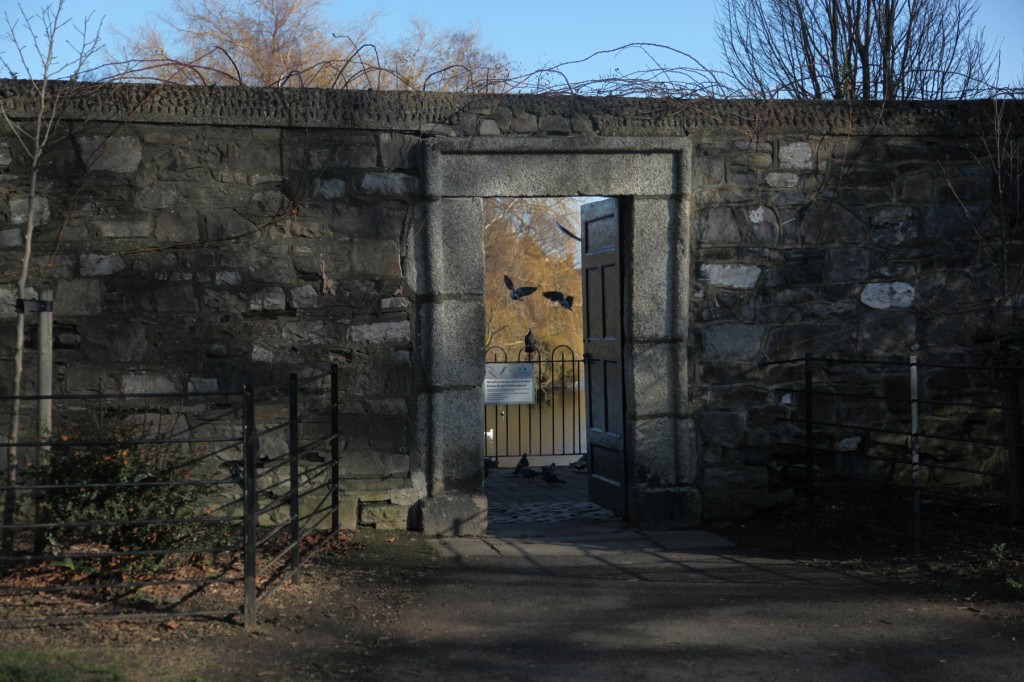 The park’s ‘secret garden’ nickname probably doesn’t really apply since the 1993-4 refurbishment, but this entrance from the linear park (a filled-in former leg of canal, stretching from North Circular Road at Phibsboro to Broadstone) gets pretty close to that sense still. A gate in the stone wall gives a view onto water, birds, and trees, a sudden jump into the world inside.

The 1990s refurbishment by Dublin Corporation (with FAS) appears to have been a major transformation, kept in good condition since. Originally, Blessington Street Basin was constructed as the Royal George Reservoir in 1810, fed by the Royal Canal from Lough Owel. The reservoir was used to store and distribute water to the north city until 1865, and continued to supply water to distilleries until much more recently – to Jameson until 1970, and to Power’s until 1976. It was opened as a public park, but by the 1990s, the basin was silted, stagnant, and full of debris, the water was bounded by a chicken wire fence, and some of the surrounding walls had collapsed. 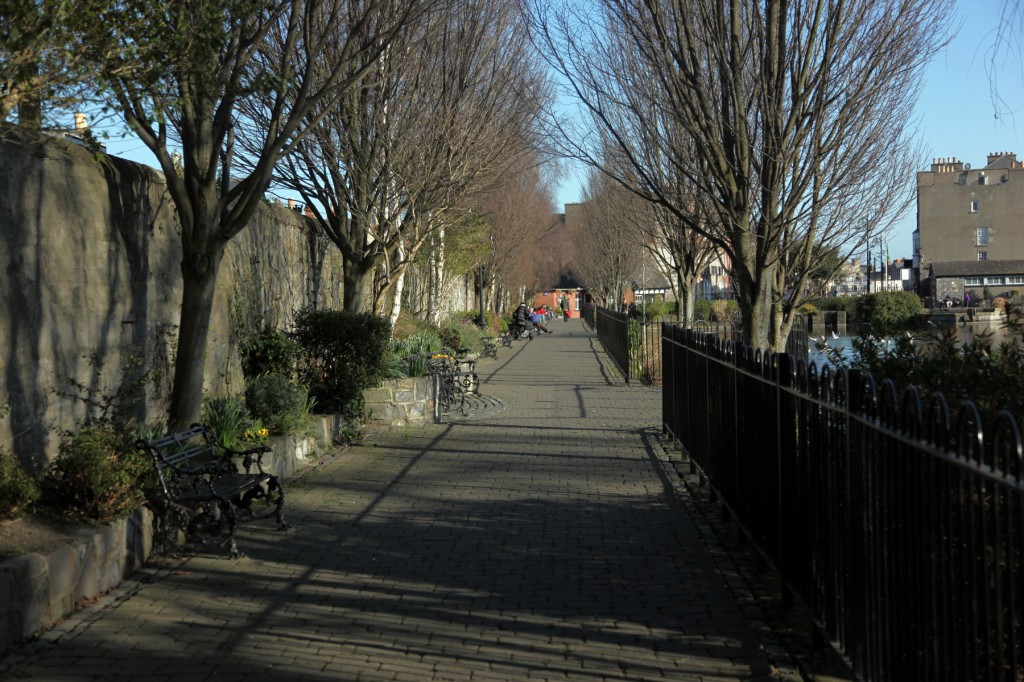 It became the subject of one of the unbuilt 1991 European City of Culture proposals. German environmental artist Dieter Magnus proposed an urban water garden, and the project was backed by the Goethe Institute, with the intention of raising private sponsorship to cover the costs. The project involved extensive community consultation, and the community rejected it. An opinion piece by Fintan O’Toole at the time did a magnificent job of celebrating this community response, examining whose City of Culture was being celebrated, and at the same time giving credit to Magnus’ work:

“Dieter Magnus looked at the basin and saw a wasteland, a lost opportunity, a rather dull and ugly place that could be transformed into something both beautiful and functional. He drew up plans for sculpted features on the water, for new paving around the sides, for opening up access to the place with an architectural entrance, for rocky forms and swampy areas around the edges of the pool, for a performance area on the water for concerts and children’s plays. It is a lovely scheme. What he did not see was that the place, for the people who live with it and use it every day, already was all the things he wanted it to be. It already has a meaning, attributed to it not by art but by people’s lived, by, in other words, culture.” (The Irish Times, May 18 1991, p.a5)

As it happened, there was a component of public art added to the basin after 1991 – Austin McQuinn’s Natural Histories sculptures are within niches along the north wall.

The restored Basin isn’t a modern park, but with a centrepiece of Victorian infrastructure, the standard-issue black heritage benches and a border of setts around the path seem almost like Dublin Neutral, letting the reservoir be the focus. The benches around the perimeter all face onto the water and it’s big enough to be a calming, absorbing view – you’re as likely to be watching the birds as noticing the people on the opposite side. 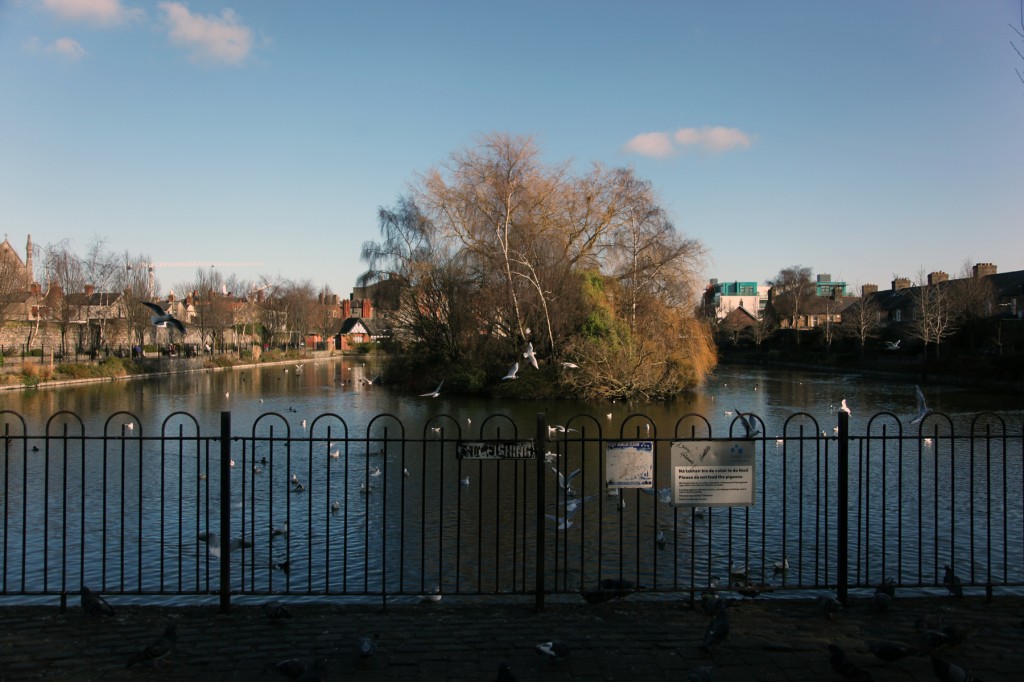 Around the walls, a higher visual boundary is made by the city itself, with a mixture of domestic rear views, gables, and a few taller landmarks. It’s an interesting assortment of chimneys and surfaces, and the park’s two buildings (the 1811 lodge and the long stone building that appears to be used by the Council) blend the walls back into the city behind. 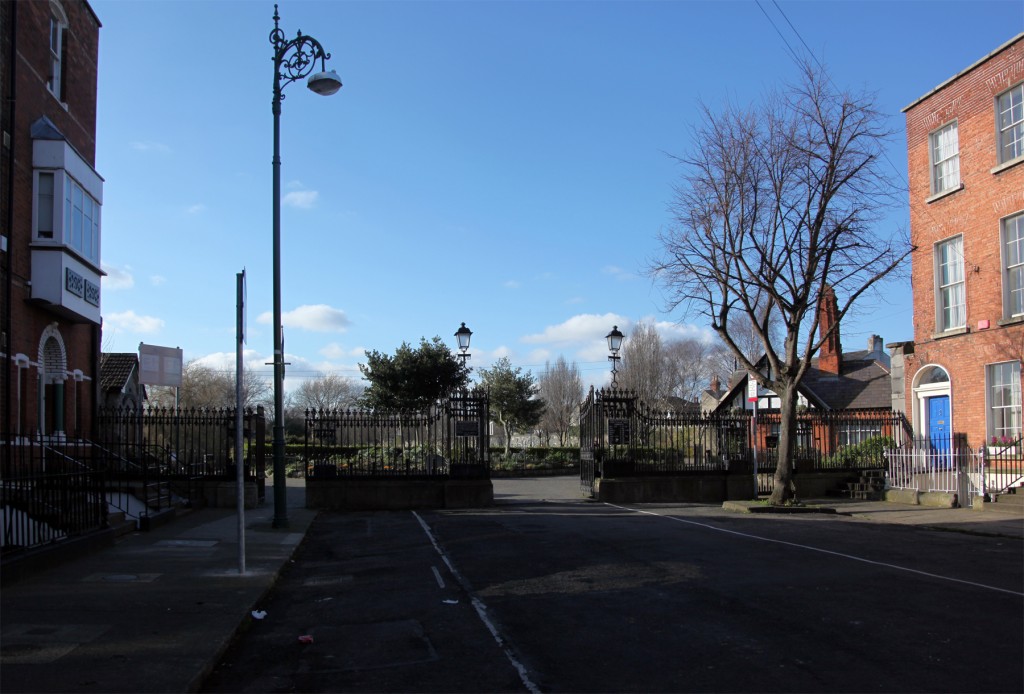 The grander neoclassical entrance from Blessington Street is interesting too. There’s less of the sense of discovery found at the opposite end, but there’s a melancholy to it that’s appropriate to the north inner city: the street’s generous width and the formality of the park entrance at the end feel slightly jarring against the signs of wear and decline on the street, like things didn’t work out quite as they were planned. It’s still beautiful and the mixture of feelings is quite particular to the area, one with many constantly changing cultural undercurrents against a backdrop substantially formed two centuries ago. The park has definitely got the sharper edge of its urban context as well as the skyline, but it’s also got a gentle quality that’s heightened by this, and that’s not quite matched by any of the city’s other parks.