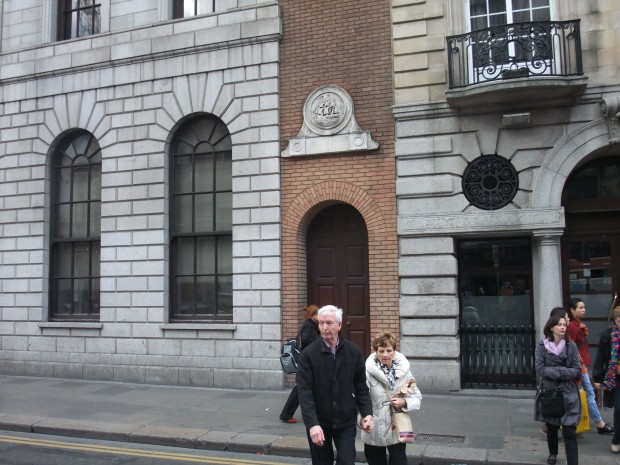 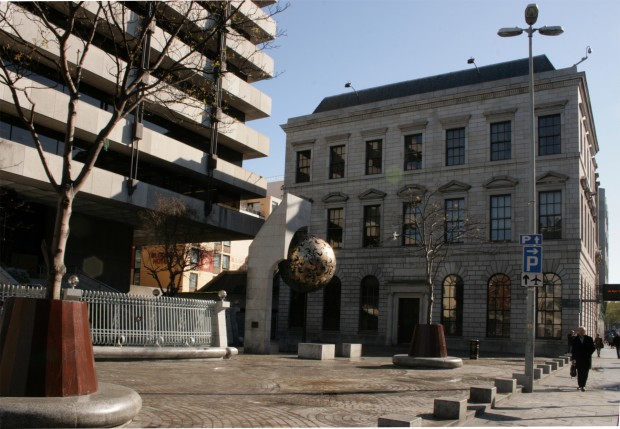 The excellent Come Here To Me! put up a post yesterday about the Ouzel Galley and this plaque on College Green. It’s a neat coincidence – the plaque nearly appeared here yesterday too, but in connection with a more prosaic story from 200 years later. One of the constant delights about cities is how memory, association, cultural context and acquired knowledge lead people to read the same streets and buildings in very different ways, and it’s happening here: the same stone plaque tells (at least) two stories back to the city.

The stone plaque is the only remaining element of Commercial Buildings, a three-storey granite building by Edward Parke, completed in 1799 (the same year the plaque is dated). Commercial Buildings stood on the site now occupied by Central Bank (1971-8, Stephenson Gibney & Partners), at the Crown Alley side, and it housed the Ouzel Galley Society’s meetings.

One of the controversies that arose in relation to Central Bank – a magnificent building, which we’ll revisit – was the threat to Commercial Buildings. It was demolished in 1973 and each stone was numbered systematically to allow for reconstruction, but instead a facsimile was built. The plaque was kept, but the rest of the building is new, rotated 90 degrees and moved off the plaza. It’s got the uncanny time-travelling quality of pastiche, but its origins are even stranger.