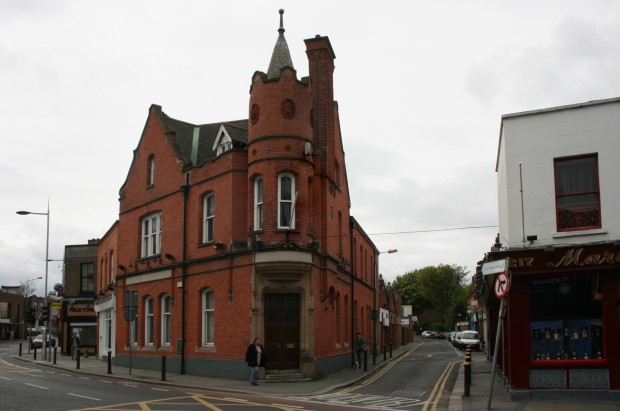 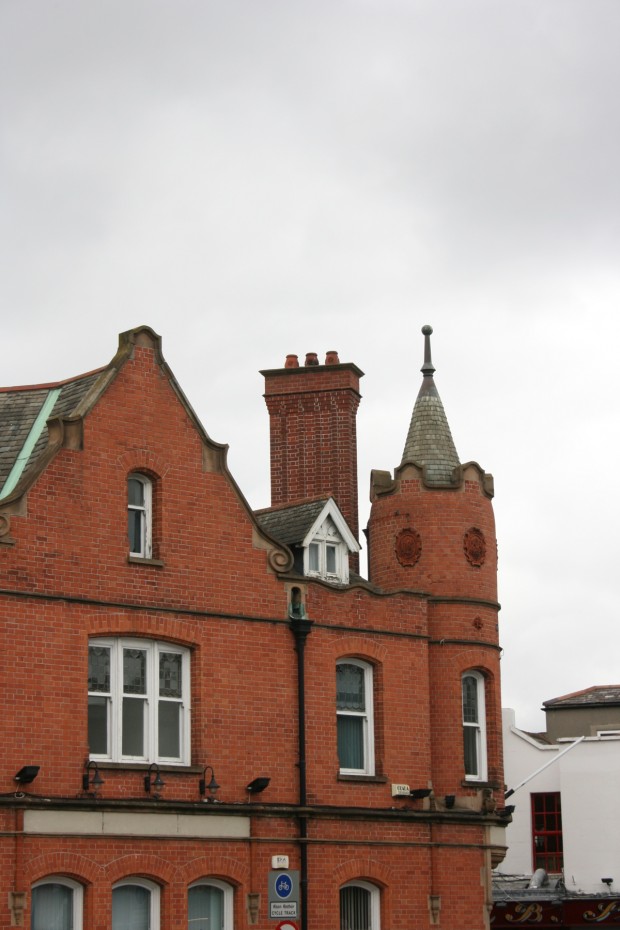 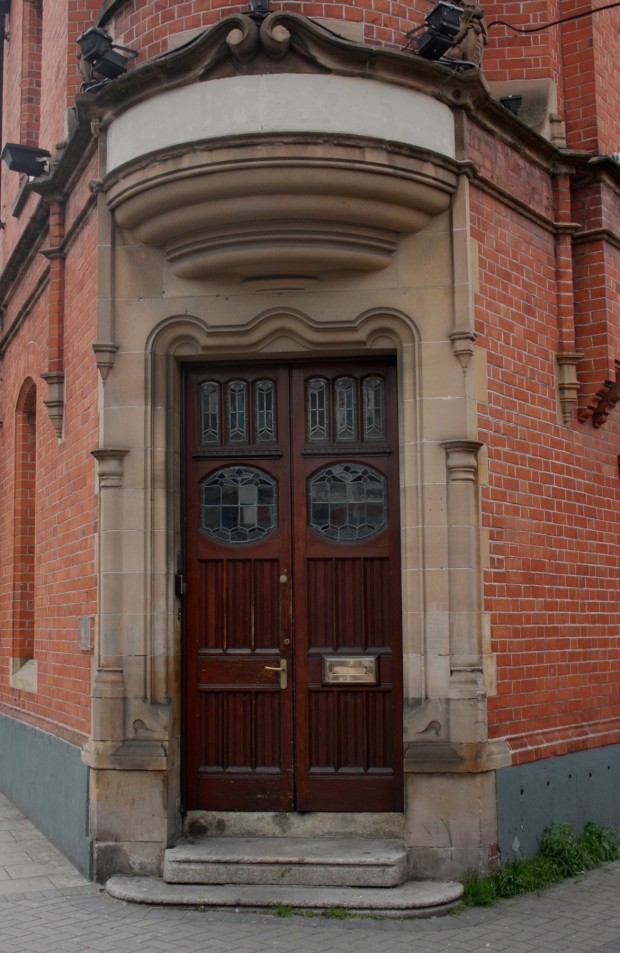 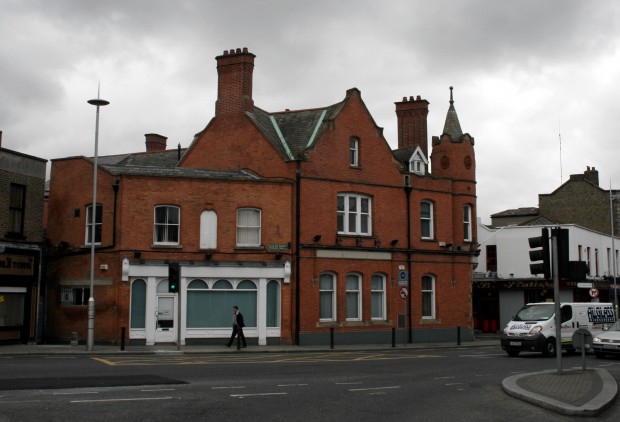 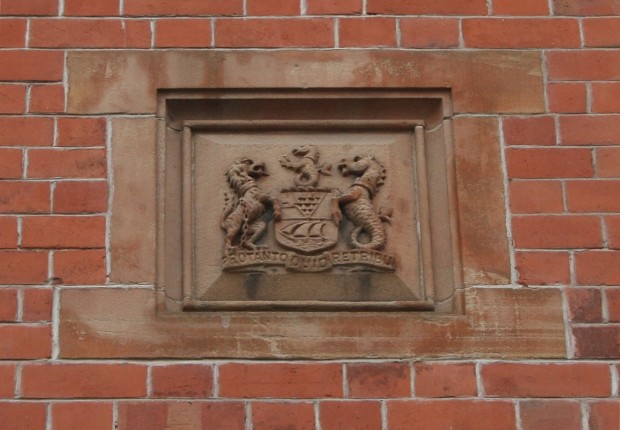 The angle of the surrounding streets marked by the entrance of the former Belfast Bank gives it such an emphasis that it’s a great pity the building’s current life (as the offices of a recruitment agency) isn’t a bit more public or walk-in. The side-street is Wynnefield Road, and the building’s busier facade meets the junction of Rathgar Road, Rathmines Road Upper, and Rathmines Road Lower. 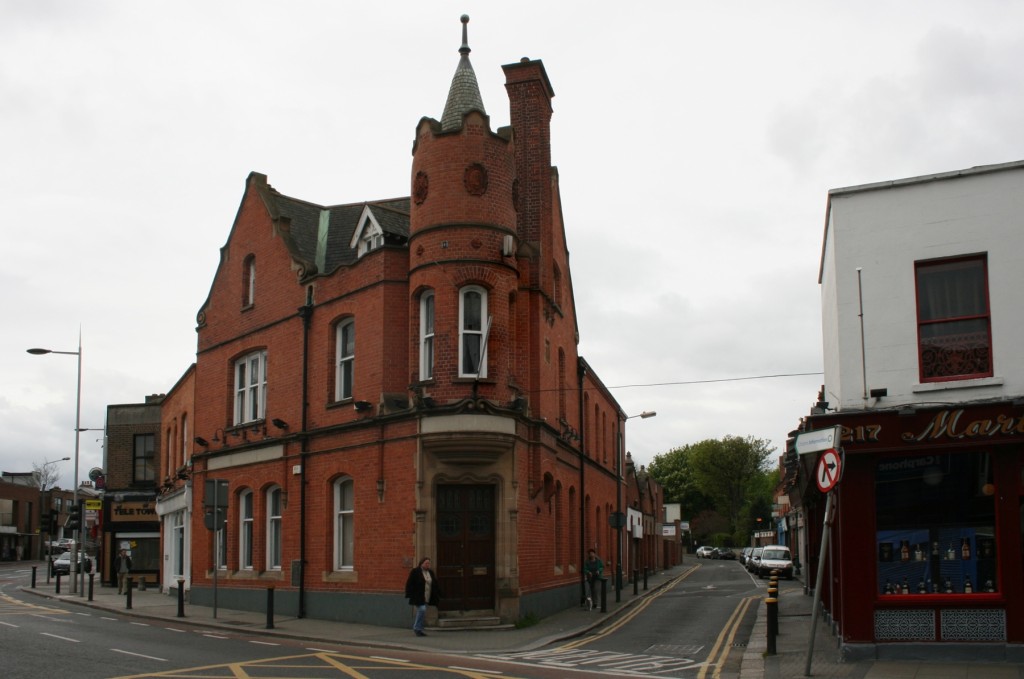 The building was designed by Vincent Craig, an architect born and based in Belfast whose work ran the gamut from golf club-houses to churches and hospitals, banks to masonic halls. It was constructed between 1899 and 1900 for the Belfast Bank. On the Wynnefield Road elevation, you can see a terracotta plaque set into the wall with Belfast’s coat of arms and motto: protanto quid retribuamus (what return shall we make for so much). The bank was more recently occupied by the Trustee Savings Bank/TSB Bank, and those with a better knowledge of banking history are very welcome to clarify the part in between… 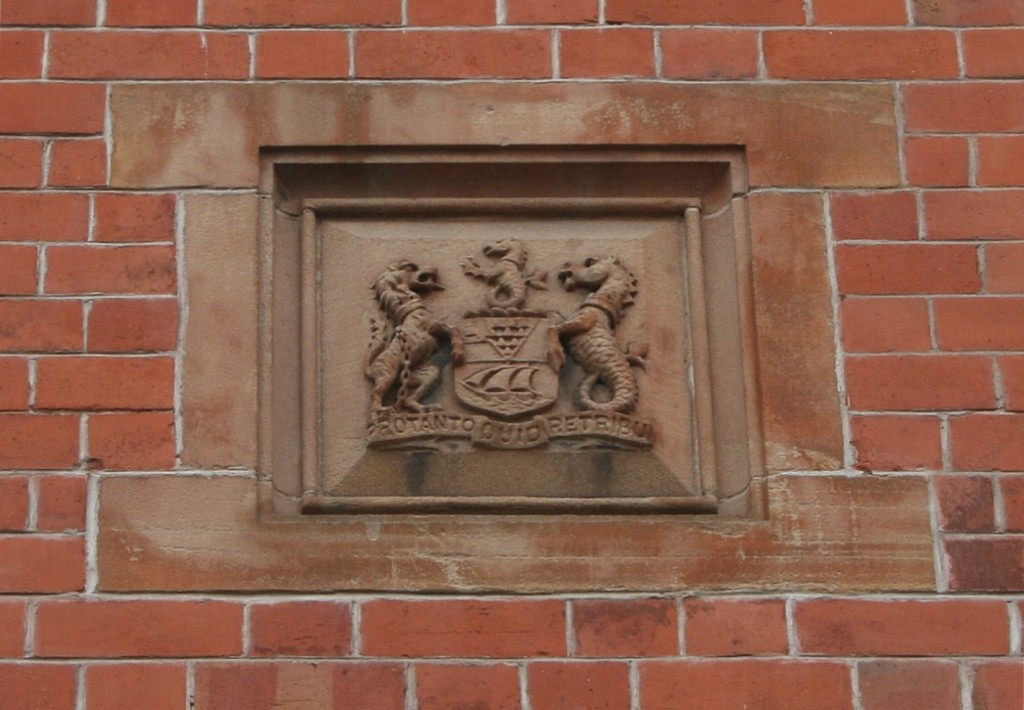 The building’s site occupied part of The Chains. According to The Neighbourhood of Dublin: its Topography, Antiquities, and Historical Association, by Weston St. John Joyce (1912, M.H. Gill & Son):

‘The Chains’ were so called, because a number of dilapidated shanties at this point were enclosed by chains hung from stone pillars such as now surround Stephen’s Green. These old rookeries were really an unsightly and insanitary slum, and were swept away some twenty-five years ago, much to the advantage of the neighbourhood. 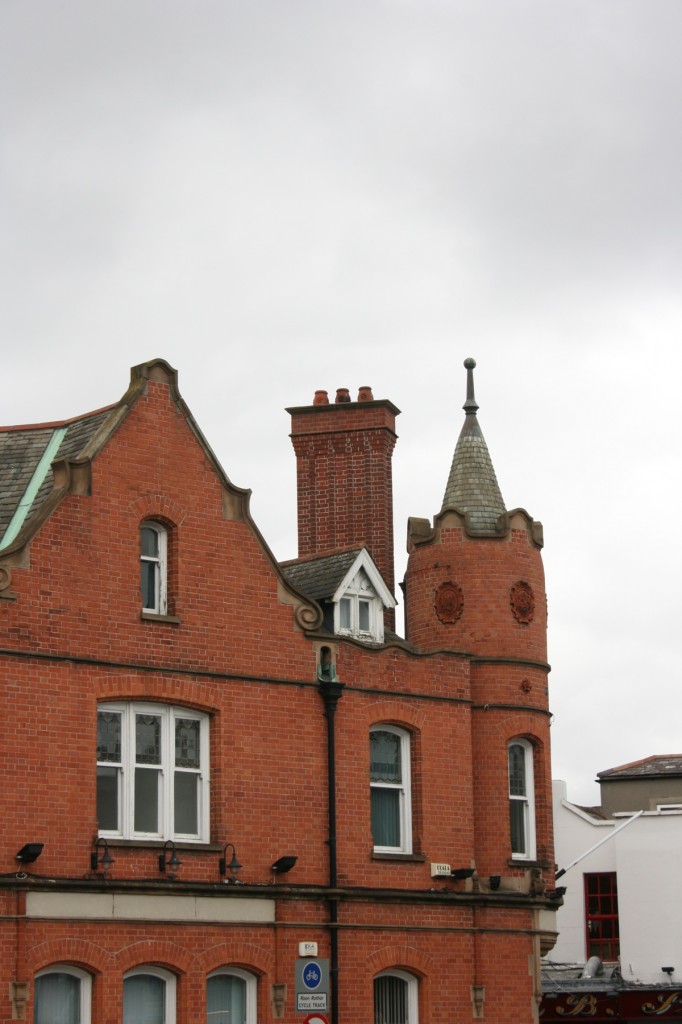 Though ‘to the advantage of the neighbourhood’ is a bit chilling as a description of slum clearance, this mannered building was certainly a smart landmark for the site. The corner is marked by a tower, topped by a finial and cut into at the base to make the entrance. The curve to the castellation is picked up on the apex of the gable, and the little peaks on the slope look even more like cake decoration when you follow the line down into the fussy scrolled base.

On the Wynnefield Road facade, the chimney’s descent stops nearly in line with the top of the door, and it’s an additional tension, a bit of brinksmanship with the visual weight as well as a clear marker of the asymmetry of the two facades. The break happens within the entrance, too, with the columns holding nothing and the pointed brackets above hanging like stalactites. Sitting on the string course, there are two stone chaps that look like lions bearing shields. The doors too have a lot going on, packed with panels and panes of stained glass. 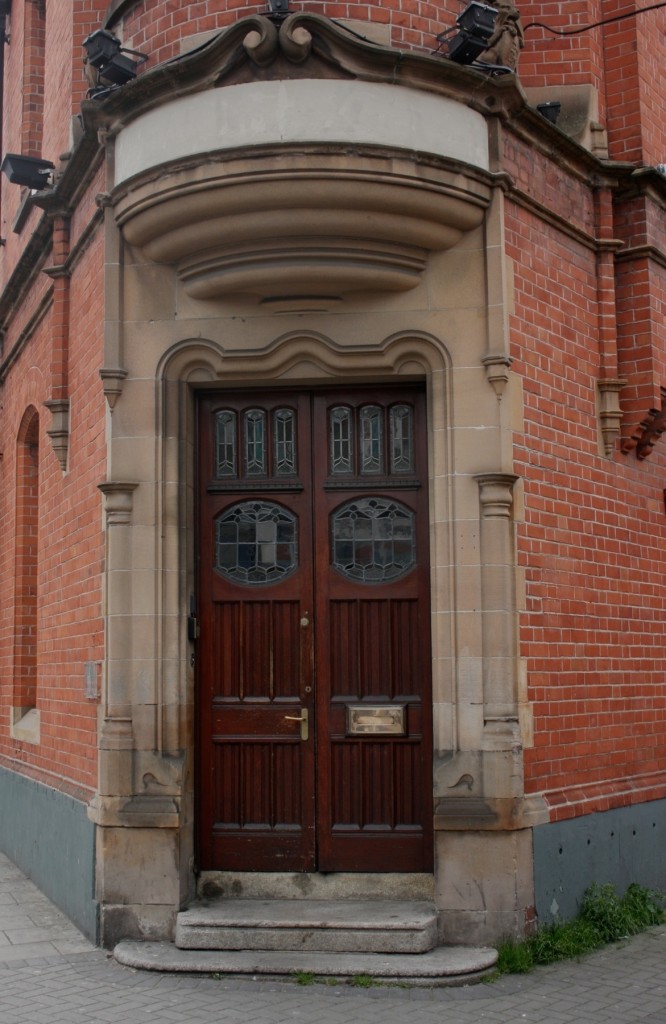 From the tone of the brick and the junction between the two, the adjoining building towards Rathgar Road is clearly a later one, though the strange parallelogram of the building’s plan and the current use of the two as a single building (“please use other door”) have me curious to look up the original drawings if I have an opportunity. 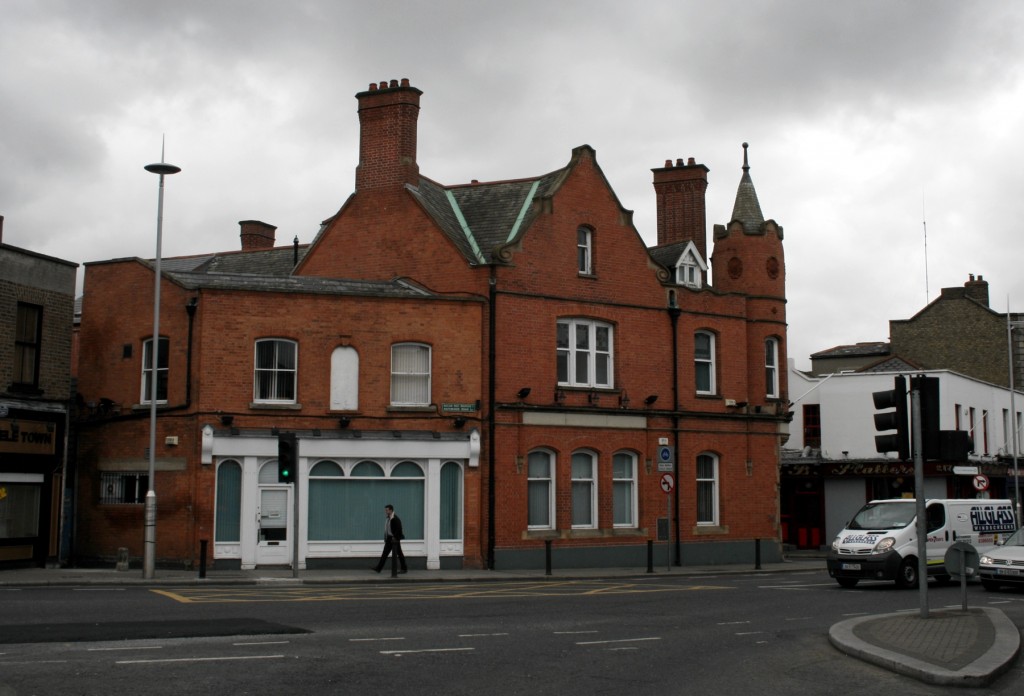